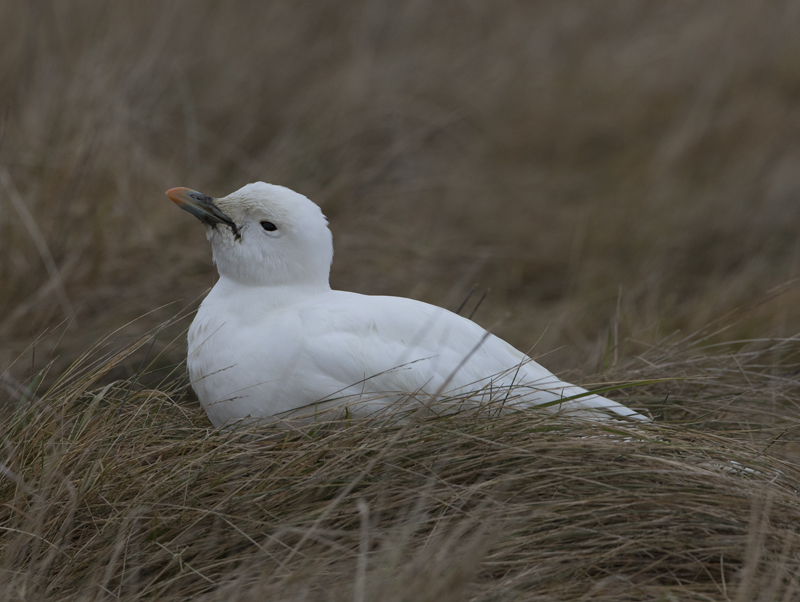 I dont understand dutch. So I dont understand, what you have written in the comment. But I sure DO remember, that wie met there at the Ivy Gull. We left, when you arrived. I explained where the gull was. And I explained that the gull was doing really, really bad. And I asked you to keep away from it and not to scare it! You showed me your "thums up". I am sure, you understood, what I said. And I am absoulutely filled with indignation about your behavior at the gull. it is absolutely inacceptable that you picked up the moribund gull and put it on a top, so you could take a better picture of it!!! How sick must one person be to behave like that? I cannot control your manner in the Netherlands, but I can expect that you respect our behaviors in Germany, when you come here! You showed that you have NO respect for the gull! And I am not willing to accept that. That was definitely the last time I was cooperative with a dutch birder!

Dear Tanja, do you mean that the dying gull in this picture was put in a position to take this photo? If so, by whom?

Ok, now... Well, after Arne Torkler contacted me and explained, that not only us, but also the Dutch Birders in large part agree to what I wrote, I might change my mind about generalizing Dutch birders... But - sorry - I will be more careful...

Yes, Max Berlijn, that is what I am trying to say! I saw the gull minutes before it died. And it was NOT able to walk anymore. And it was hiding (because it was extremely weak and trying to hide from predators!) in the grass and could not be seen well. The gull was not able to climb that little "bump". And a friend of mine arrived after I left and told me what happende. I can name at least four Germans who were there and who are willing to testify that those two Dutch Birders picked up the moribund gull and put it there for the picture!

Herr Uhlhaas, the text is not telling the truth in several aspects... The gull was found by Malte Georg. I was there when he found it. And nobody allowed them to touch the gull! The other birders were protesting - that's what I heard, when I asked them after I was told by one what had happened right after I had left.

(The board of) Dutch Birding does not in any way condone the handling of (rare) birds in distress in order to take better pictures; such illegitimate handling is clearly the case when a bird is obviously taking its final breaths.

Both Dutch birders who are posing with the dead bird in another picture deny having handled the Ivory Gull while it was still alive. They stick with the story that an authorised (German?) person went up to the bird, allowing all birders present to follow him and take pictures of the bird from nearby; it died minutes later. This story should be easy enough to check.

To all reading this I would like to point out rule #8 of the 'Gedragsregels' (Respectful rules of engagement): if anyone witnesses inappropriate behaviour of a birder or photographer, please take a photograph of the behaviour, the person and/or his or her license plate. Appropriate action can then be taken against him or her.

This was the bird, when I saw it right before I left..
.https://www.youtube.com/watch?v=fjXaXOECu6M
This bird was NOT able to climb that little hill. It is obviously trying to hide! NO ONE allowed to touch the bird. If not the Dutch, who put the bird on the little hill? Why do the Dutch have the picture of the gull on the hill and no one else? It makes me really angry that they deny what they did!

I ask Co van de Wardt: You probably  took lots of pictures of the bird before this one. I made that video of the bird right before you came (we met at the cars 200 m away from the gull - we left, you came). Do you have any pictures of the gull on it's way to the top of that little hill? What is your explanation of how it got there?

As many of you know, on January 20th, 2017 the adult Ivory Gull of Northern Germany that some of you went to see, and others perhaps hoped to still be able to, died of a (most likely untreatable) disease. In any case, the German authorities did not give permission to catch the gull to bring it to a bird recovery center and so its death was inevitable.

However, I’ll start with the Dutch Birding ‘Gedragsregels’ (‘rules of conduct’) (www.dutchbirding.nl/pagina/1355/gedragsregels_voor_vogelaars). Recently I updated the rules Dutch Birding presses its members to follow when twitching or otherwise viewing a bird. Many of these rules relate to respect for landowners, village inhabitants and fellow birders. However, it goes without saying that the bird’s safety and well-being is of primary concern (therefore this is rule 1). Basically, even though excitement sometimes gets the better of us, common sense should prevail at all times.

Rule 1 states that disturbance to a bird should be avoided / minimized. It also specifically states that photographers should verify whether they are not doing anything that could potentially harm the bird.

Rule 2 forbids the entering of lands for which no prior permission has been obtained.

Rule 3 asks of people to listen to what others have to say regarding the well-being of a bird.

Rule 5 asks of people to tell their fellow-twitchers to stop what they’re doing if their behaviour contradicts rules 1-4.

In the view of Dutch Birding rule 1 was clearly broken here. It seems as though rules 3 and 5 were also violated. Prior permission to enter the field was granted (at least to the persons there to collect the bird).

Chronologically, this is what happened:

1. German & Dutch observers were standing on a dyke overlooking a fenced field in which the Ivory Gull was found earlier on 20 January 2017.

2. After the observers witnessed a particularly strong jerking movement of the bird, after which it disappeared, two German birders, on-site to collect the bird for autopsy after it died, told the others (in English) they would walk down alone to check whether the bird had died.

3. They were nevertheless followed into the field by two other German and three Dutch birders.

4. Upon arrival the bird was still (but barely) alive, half hidden under vegetation.

5. After taking a picture of the partly covered bird, the two other German birders left the site to not further disturb the bird; one German conducted several phone calls in order to consult the relevant authorities about how to proceed.

6. A Dutch birder picked up the bird and placed it carefully on an elevated spot in the grass in order to obtain better photographs. One of these photographs is published on Dutch Birding website.

7. From the dyke, the returned German observers meanwhile clearly voiced their negative opinions about the handling of the bird.

8. The bird eventually creeped back into cover.

9. One of the Dutch birders then approached the bird close in order to take photographs with his cell phone.

11. The dead bird was picked up and photographed by the Dutch birders. One of these photographs is also published on Dutch Birding website.

12. The German birder collecting the bird asked those present not to publish any of the photographs taken.

While it is understandable that people desire to get the best possible views (and/or photographs) of a (rare) bird, one should observe common sense as to how far one can go (literally and figuratively speaking).

In this particular case the bird was clearly dying, and to further aggravate its apparent distress by approaching it closely and handling it for the sake of a better picture is simply appalling.

Equally disturbing is the fact that none present prevented the handling of the distressed bird.

Recently, Dutch Birding unfortunately had to act upon a violation of rule 2 (accessing a restricted area, thereby willingly jeopardising chances of an excursion to a rare bird). In that case the culprits were not sent any Rare Bird Alerts for two months.

In the view of Dutch Birding, a Dutch birder clearly broke rule 1 here by handling a distressed bird for his own benefit: to obtain better pictures. It may be that all of those who approached the dying bird (German and Dutch) broke the rule to some extent (for which only the persons responsible for collecting the dead bird have a valuable excuse), but the handling of the bird just for better pictures in our view crosses the line in a major way. Furthermore, when asked to describe what happened in detail, the person who handled the bird lied about it. The other Dutch birders also didn’t come clean, and/or downplayed their actions by stating that ‘others also photographed the bird’.

Dutch Birding has therefore decided to withhold Rare Bird Alerts for two months from the person handling the distressed bird, and one month for the other two. All have been notified that a repeat-offence could lead to their removal from the Dutch Ranking.

Both pictures (one of the distressed bird after it was moved, and one of the dead gull being shown) will remain on this website. If only so that others can respond to this message and are able to reread the thread caused by these actions. Dutch Birding feels both images are strong reminders of how not to behave, and sincerely hopes similar actions will be avoided / aborted in the future.

I’m not a photographer. I am a twitcher but I also have common sense. It is beyond me why someone would approach a distressed, dying bird for better photographs or views. There are only two reasons why I would approach a bird in that position: to either pick it up and bring it to an animal shelter, or to put it out of its misery.

People ask me, if I am satisfied with the DBA's decision. Well, I wouldn't call it "satisfied", but I'm content and very gratefull that no effort was spared to clarify what happened. I think misbehavior of photographers and birders like this is a serious issue - and of course not a Dutch problem. It could have been German photographers/birders just as well. I'm well aware of that.