The Birds of Ghana 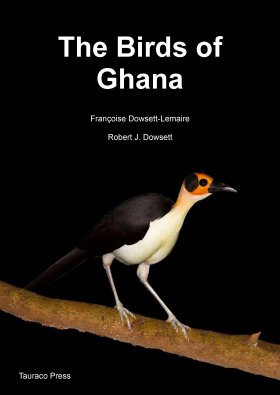 Publishing a detailed bird atlas of an African country is, by any standard, a huge undertaking. Many countries are large, birders are few, there are little or no standardized long-term censuses covering larger areas and/or all species, and existing data and information are spread over a multitude of sources and vary in nature and quality. Yet, following Zambia and Malawi, Françoise Dowsett-Lemaire and Robert Dowsett have done just that, this time for Ghana.

A large amount of field work in the 93 100x100 km squares was combined with a meticulous check of published and unpublished data (up to contacting observers from the 1987 atlas by Grimes to check unlikely records!). But this book is much more than an atlas. The authors start off with an interesting account of Ghana's ornithological history. A Dutch 17th century merchant was the source of the first anecdotal information on birds from Ghana, and the first proper naturalist was also a Dutchman, Hendrik Severinus Pel, and his name lives on in Pel's Fishing Owl and Bristle-nosed Barbet Gymnobucco peli. This chapter reads like an African 'Whose bird?', with many familiar names such as Hartlaub, Ussher, Sharpe, Shelley, Lühder and Baumann. The following Vegetation and Habitat chapter does not limit itself to a description of vegetation and zonation, but also provides to-the-point linkages to bird species, which helps the uninitiated form a clearer picture of what the habitats look like and which bird communities one is likely to expect. The book then goes on to describe in detail the major biomes of the three biogeographical zones of Ghana: Guineo-Congolian (Upper Guinea), the Sudanian zone and the transitional zone between these two. This obviously includes the bird species typical for these biomes, but also has interesting information on dynamics of distribution and comparison with other regions on the continent. A chapter on the composition of the avifauna very usefully explains seasonal movements and breeding, information that is usually frustratingly absent from field guides. Finally, a chapter on conservation describes the protected areas per zone, with their notable bird species and the issues and threats for these sites. A table shows the occurrence of all biome species for each site. This chapter reads as an annotated gazetteer for visiting birders - and as a handbook for conservationists. Based on their work, the authors propose additional sites to be classified as Important Bird Areas. The conservation status is objectively described and the overall picture is not encouraging. Degradation - even inside protected areas - as a result of agriculture, logging, dams and mining, is widespread.

You're now on page 140 and the next 500 pages are for the species accounts and atlas maps. If the finale of the conservation chapter left a somewhat depressing feeling, the overview of the enormous bird diversity Ghana still supports will leave you baffled: 749 species (of which 143 Palearctic migrants), with some squares in the forest and transition zones hosting over 300 species. The accounts are concise but give interesting information on ecology, behaviour, breeding and movements. The maps are well-designed and usefully show the transition zone in grey shading, which helps to place birds in their general zones of occurrence. Presence is indicated by closed and open symbols per square. An open symbol may have different meanings, which took me a little time to figure out: the explanation is given in the species text. In general, it means that the species is unlikely to be found in that square, as a result of the record concerning either: a historical record with habitat now gone; an of out-of-range record; or birds on migration. The taxonomic sequence is that of Howard & Moore, in contrast to most field guides, which had me leafing to and fro looking for selected species. A very nice touch is an appendix showing all 2,500+ ring recoveries in Ghana, of which many with maps. Finally, a gazetteer shows squares and coordinates for all mentioned localities.

Helped by the very readible style, this amazing display of knowledge deepens one's understanding of Ghana's (and Western African) bird ecology profoundly. For visiting birders, it will do more than help plan your trip: it will add multiple dimensions to your visit. For birders who have been to Ghana: you'll want to come back. For scientists and conservations the book provides a sound basis for reference and, especially, further work. Perhaps you are neither of these, but harbour an interest Afrotropical birds and ecology. Whichever category you'd place yourself in: buy this book!!