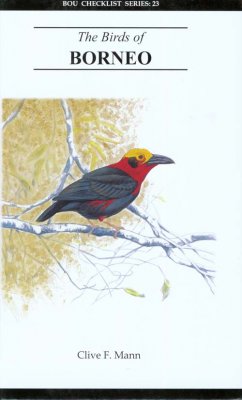 The 23rd addition to the BOU checklist series focuses on the island of Borneo. Ironically, in the Editor's Foreword Alfred Russel Wallace is quoted, badmouthing the Bornean Avifauna. Though brilliant and visionary as Wallace was, he managed to miss the beauty offered by Borneo's birds. Birders know better and Borneo proves to be a highly popular birdwatching destination. The standard reference on the birds of Borneo, aptly named Birds of Borneo, was authored in 1960 by the late Bertram E Smythies. In 1999, Geoffrey W H Davison thoroughly revised this seminal work for its fourth edition already. 'Smythies', despite its huge size still concise, does not go into meticulous detail where dealing with distribution. It is this niche which is filled by the work of Clive Mann.

The checklist starts off with a 20-page introduction. The sections on history, geography, and vegetation are an interesting read but the entry on other fauna is a bit pointless, basically only providing an overview of Bornean mammals, paying only the slightest amount of attention to the other tetrapod groups and not even hinting towards the (vast!) remaining animal life inhabiting the island. The section on Bornean avifauna is equally hit and miss. It starts off with a messy discussion on species concepts. The section on endemism I really consider a blemish on this work. The needless repetition of all endemic species in the text, whereas they are listed in a table on the opposite page, must surely be a mistake. A discussion on the Bornean avifauna in a wider geographical context provides interesting insights, especially where considering the complex historical biogeography of the Sunda Shelf, resulting in Sabah being relatively distinct from the rest of the island. However, the necessary information is scattered throughout the introduction (resulting in some needless repetition) and a more focused and elaborate approach would have been required to do this interesting aspect justice. The cover of the book is appropriately graced with an illustration of Borneo's own endemic, monotypic, family: the weird Bristlehead Pityriasis gymnocephala. Furthermore, color photographs of a random selection of birds are included. These do not really add anything to this work and could just as well have been skipped (maybe this could have reduced costs?). More interesting are the photographs depicting typical habitat types.

The main body of the book, of course, consists of accounts of the well over 600 species recorded on Borneo. The focus lies on composing an overview of Bornean records and this is the strength of Mann's work. For each species, Mann provides localities (a gazetteer is included at the end of the book) accompanied by references (totaling over 30 pages) and briefly mentions the details on the observations (which makes one appreciate the extensive collections amassed during the 'old days'). Records are mainly subdivided across seven geographical regions: the sultanate of Brunei (where Mann lived for over 10 years), the two Malaysian states of Sabah and Sarawak and the four provinces (Timur, Tengah, Selatan and Barat) of Kalimantan (Indonesian Borneo). Occasionally (groups of) islands are discussed separately. What becomes obvious is the strong bias towards the northern part of Borneo (ie, Sabah, Sarawak and Brunei); Kalimantan is relatively poorly covered (little ornithologists/birders venture there). This is not a point of criticism; it simply reflects the availability of data. A small paper on the Gunung Lumut Protection Forest in East Kalimantan that a fellow student and I wrote after conducting fieldwork for our MSc is cited regularly, even for bulk birds, and sometimes represents the only provincial record. Although more data should be available in 'grey' literature (and I doubt whether Mann has spent enough effort on trying to obtain it), large knowledge gaps on Borneo's avifauna remain. Additional information per species provides information on its global distribution and IUCN red list criteria. A general idea is given on species' occurrence on Borneo, including details on status, abundance and altitudinal range. More details on habitat are provided under a separate header and similarly attention is paid to (mostly) Bornean breeding records. Taxonomic notes are regularly provided in the species account, providing additional information on decisions taken and on controversies remaining. Taxonomy is important for both conservation and birdwatchers. The path followed by Mann seems a bit random: in some cases it is progressive but in others it is old-fashioned. Why recognize Bornean Forktail Enicurus borneensis but not Bornean Whistling Thrush Myophonus borneensis? Asia is 'overlumped' and every effort to speed this up is welcome but recent field guides and world lists are much further ahead than Mann in countering this problem.

Mann's checklist is a very welcome addition to the book by Smythies and Davison. It should be noted that in 2001 the book Ornithology of Sabah: history, gazetteer, annotated checklist, and bibliography by Frederick H Sheldon, Robert G Moyle and Jody Kennard was published. A pdf file of this work is floating around for free on the internet. But of course Borneo is so much more than just Sabah, the destination of most visiting birders. The fact that the loss of forest cover in Indonesian Borneo takes place at unprecedented speed illustrates of what utmost importance the basal distribution data now brought together by Mann is. This checklist is a basis for conservation efforts and a starting point for future ornithological exploring.