John Ash & John Atkins 2009. Birds of Ethiopia and Eritrea: an atlas of distribution. 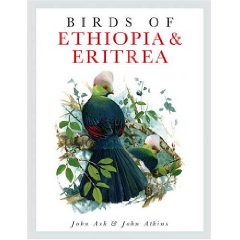 Ethiopia and Eritrea are one of the best African birding destinations where, for more than 35 years, the authors have been plotting records on half-degree maps. The resulting atlas shows the distribution of each species in 872 maps. Succinct texts accompany each map, providing information on occurrence, distribution, subspecies, habitat, breeding and favoured sites. The book has useful introductory chapters. For instance, in nine pages and 13 portraits, the first natural history explorers from 1625 onwards are presented. There are chapters on topography, vegetation, climate, bird habitats, conservation, migration and breeding seasons. Many of the 32 endemic species are illustrated in a photo gallery by Hadoram Shirihai (for a few other pictures of endemics, see Dutch Birding 15: 268-271, 1993). At the end of this 463-page book, there are lists of hybrid species, an annotated list of 48 species considered unacceptable for a variety or reasons, a detailed list of important bird areas, lists of restricted-habitat species, a detailed overview of ringing results (including recoveries as far north-west as Denmark, Germany and Sweden), an excellent gazetteer of localities (27 pages) offering alternative names and spellings, altitude and coordinates, and an extensive bibliography (also 27 pages). Obviously, this is a landmark publication for this region which is now also served by a softback field guide, Birds of the Horn of Africa, by Nigel Redman, Terry Stevenson & John Fanshawe 2009 (ISBN 978-0-7136-6541-3; 33 Euro). Arnoud B van den Berg