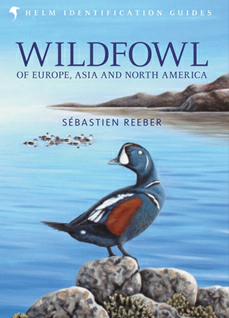 In The Netherlands, wintering wildfowl are an avian attraction of global importance. A new Helm monograph about swans, geese and ducks should therefore alone raise interest among Dutch birders. That, and the beauty of these birds of course!
This book is published very shortly after the (mostly) highly acclaimed Helm guide Robins and Chats. Santa's got some choices to make here.

Madge & Burn
In the 80's, Wildfowl (Madge & Burn 1988) was the third book in the successful Helm series and I still regularly use it as a reference. Since the 1988 monograph (only available as e-book now) covered all continents, the scope of the new guide is more restricted, but it seems fair to compare the new book with the standard Madge & Burn set over 25 years ago.

Taxonomy
The taxonomy doesn't follow an official list. Reeber chose what he thinks is the state of the art - and he knows it's not perfect. So there's Cackling and Canada Goose, Black and Common Scoter, Green-winged and Eurasian Teal, but for instance the Brent and Bean Geese taxa are treated as subspecies. I'm not a taxonomist, so I have no opinion about these choices. It's the variety that counts and he certainly deals with that. Reeber is fully aware of different approaches and, as he calls it, 'heated discussions'. These are described in depth in the texts.

The plates are a joy
The very good plates, made by the author himself, show many plumages, different taxa and variety within species/ taxa. I especially like the paintings of the heads that allow close comparison of subtle differences in structure and colouration between similar (sub)species. In general, Reeber seems to capture the jizz of perched geese a bit better than the ones in flight, but the latter are by no means bad. The 11 races of the Canada-Cackling Goose complex (including variants) are depicted on two pages, which results in rather small images for such a difficult group, but this is about my only comment on the plates. Another great feature is the most extensive coverage of hybrids in the plates, texts and photographs I've ever seen. Even hybrids I never heard of like Smew x Goldeneye are dealt with. Shame evolution hasn't 'produced' a bird like this as a stable, valid species: it looks pretty! 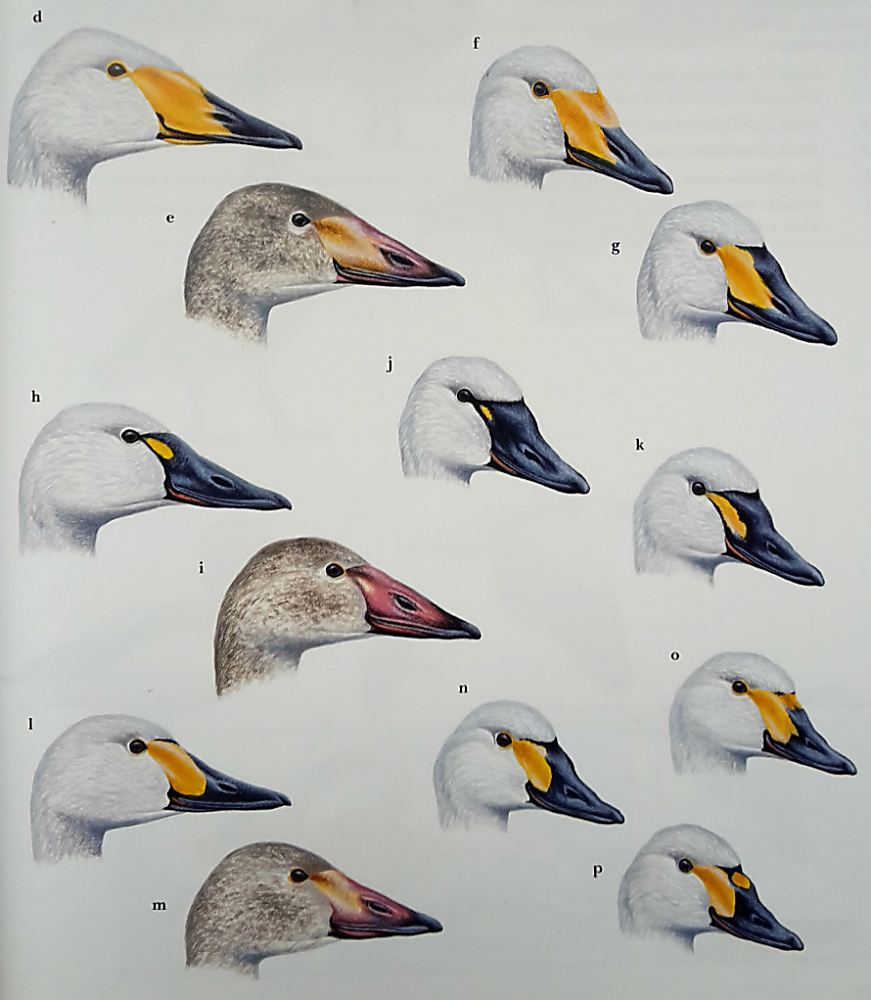 Maps and distribution: accurate and confusing at times
As far as I can tell, the maps are accurate, though minor areas are not shown (they are mentioned in the text). For instance on the Red-breasted Goose map The Netherlands isn't shown as a (minor) wintering area, while quite a few birds, including family groups, turn up every year. The remarkable recent breeding of Smews and Whooper Swans isn't shown on the maps either, nor are they mentioned in the text. These choices are understandable as they can be classified as exceptions. More peculiar is that feral populations of Snow Goose, Ruddy Shelduck, Mandarin and Ruddy Duck in Europe aren't shown (they are of course mentioned in the text), while the more common Canada and Egyptian Goose are. My biggest comment on the maps however, is that distinct taxa (the heated discussions!) have no separate maps for the different populations. This e.g. results in a combined map for all Brent Geese taxa. Some readers mentioned that information on the status of vagrants in the Western Palearctic is very limited, though personally I don't see the value of summing up numbers of (accepted) vagrants per country.

Not all Asian species are covered
It's obvious that Reeber is a western European, with a strong interest in North America, as the species of these continents are dealt with more extensively than the Asian species. Wandering and Spotted Whistling Duck, Pacific Black Duck, Sunda Teal, Philippine Duck, the probably extinct Pink-headed Duck: where are they? Obviously this book doesn't cover the entire Asian continent: the Indo-Malayan, Sundaic, Wallacean and Philippine regions are not covered - a choice that's not explained in the introduction. On the other side of the world West Indian Whistling Duck is missing, while it has been observed as a vagrant in Florida (thanks for this one, Max). This, however, is compensated by the more extensive treatment of European and North American taxa, which are more relevant to the vast majority of the readers anyway. 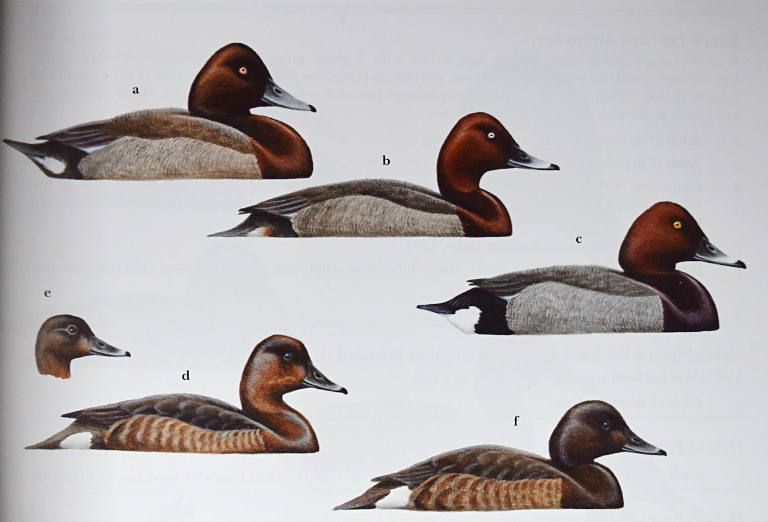 Six out of eight (!) plates of the Common Pochard x Ferruginous Duck hybrid. There are also three photographs of this hybrid. It's shows how thoroughly Reeber has covered Anatidae hybrids.

Identification: it's good!
For moult strategies Reeber uses the American terminology, which might take some time getting used to, but he explains his reasons for this in the introduction. The descriptions of taxa that are difficult to separate (e.g. Cackling, Canada, Bean and Brent Goose taxa, scoters and Common Eider taxa) are far more extensive than in Madge & Burn. That fact that Reeber used more than twice the amount of pages Madge & Burn did for less species gives an idea about the quantity of the extra information this book gives. Despite the phenomenal coverage of hybrids, Reeber does not mention that some authors believe that all blue Ross's Geese have Snow Geese genes, as a "blue allele" hasn't been found in this species (yet?). The new information on Tundra and Bewick's Swan identification (Visscher & van Duivendijk 2015) of course arrived too late to be added: it's the curse of every book that the world moves on! He however comes close to Fred's and Nils's findings: Reeber mentions that in Bewick's the yellow of the bill 'may extend over all or part of the orbital ring'. And in two out of three Tundra Swan plates (the ones with the most yellow on the bill), the area between the black and yellow of the bill is obviously greasy, while this is sharply demarcated in all Bewick's plates. More line drawings could have been clarifying in some cases (there are none for the geese for instance). But these are just details. I very much like that I now have the most recent and relevant ID and ageing knowledge thoroughly combined in one book, which makes this the most comprehensive Anatidae ID guide for the covered area.

Unfair feedback?
Every species has a short caption about the occurrence in captivity, which I find very useful: it's a world I hardly know. For twitchers and rarity committees it's for instance good to know that Hooded Mergansers are common, cheap and easy to breed, while Barrow's Goldeney is rare, expensive and hard to breed. The captions for Habitat and Life-cycle and Range and Population are rather short. I realise most birders are probably less interested in ecological information than I am, but information on food, nests, eggs, incubation and fledging periods is either short, or not described at all. Migration is one of the most fascinating phenomena for birders. For such visible migrators, the attention the subject gets is very limited. It's of course difficult to summarize migration for often widespread species, but this could have been discussed in the introduction like it was in the Helm guide Raptors of the World (Ferguson-Lees & Christie, 2005) by pointing out mass migration areas and their most relevant species. Remarkable movements of feral birds in Europe (Egyptian Goose, Ruddy Shelduck and Mandarin Duck) are not mentioned at all. This is however an identification guide, so maybe this feedback isn't fair.

Calls and pictures
What does play a role in ID is voice. And voice is only dealt with shortly and there are no sonograms. Especially in geese (that often migrate during the night) these would have been valuable. The voice captions are therefore comparable to Madge & Burn. Pictures were only added later on in the Helm guides, so the 1988 guide hasn't got any. This book of course does. As more often in the series, some pics are truly fantastic (Tormod Amundsen deserves to be mentioned!), but the sharpness and colours of some others are less impressive. The accompanying texts explains the sex, age or (putative) hybrid origin, which makes this section far more valuable than for instance in Robins and Chats: it truly adds something to the plates.

Final conclusion: Reeber vs. Madge & Burn
So where do we stand? For € 39,99 this is an affordable Helm guide. Although I have some feedback, I really like this book. I can only take my hat off for the immense work Reeber has done without the help of any co-authors or co-artists (!). The most important parts of this identification guide are very good: the plates and the plumage descriptions. Compared to the 1988 guide, difficult taxa are more thoroughly dealt with, there's extensive coverage of hybrids and photographs are now added. The fact that Madge & Burn covered all continents, makes their book still relevant. But Reeber's work is now my first reference for Europe, North America and most of Asia. It already helped me to analyse a Ross's Goose in Holland, which I believe is a bird with Snow Goose genes.
But what about choosing - if you have to - between Robins and Chats and this guide? Well, that's up to Santa...