August 21st BEHAVING LIKE A REGULAR TOURIST
When I woke up this morning the weather was horrible, cold, grey with wet snow. Since there were next to zero possibilities anymore around Punta Arenas and since my flight would leave at 1 PM I decided that today I would do things like a regular tourist :). So for the first time this Biggest Year I returned to my bed, slept till 9 (!) AM, had a cup of coffee and some nice breakfast and enjoyed watching Southern Fulmars and Southern Giant Petrels with my scope from the comfort of hostel Entre Vienos’ living room. Indeed I should have flown to Santiago the evening before which would give me a day that I could have spent elsewhere, I guess that’s how the cookie crumbles, and you can’t think everything through to perfection…

After my flight to Santiago and a taking a taxi to my hostel I arrived just in time for a short stroll through the neighbourhood, after all I did not want to have another zero-day this year! However time was running out and the sun was already setting… Had I made a stupid mistake to take things so casually today? Just as I started having a panic attack – people were giving me weird faces as I frantically scanned every tree I could find with my binos, ‘I’m trying to break a record here people, give me a break’! – Suddenly I saw something reddish with wingbars fly past that landed on a tree in the garden next to me, could it be? Yes!!! Rufous-tailed Plantcutter, species number 4777! Dodged a bullet there :).

August 22th CRAG CHILIAS AND MOUSTACHED TURCAS
At 7 AM Fernando Diaz Segovia – the owner of Albatross Birding and Nature Tours and one of Chile’s top birders - picked me up for my full day looking for Chilean endemics in the mountains above Santiago. Fernando is involved in multiple conservation projects – Diademed Plover, Magellanic Plover and Markham’s Storm-petrel - throughout the country, so an honour to have him as my guide for the next couple of days.

It was slowly getting light as we drove up into the Andes (Santiago lays right at the base of the mountain range). The first bird on the agenda was a very cool endemic furnarid called the Crag Chilia. If you wonder about this name, Chilean birds are renowned for having excentric names. Only a little playback was necessary to persuade this bird to come in for a close look. While marvelling at the Crag Chilia we saw our first of many Moustached Turcas, a striking endemic tapaculo with an equally striking name.

After hauling in another fantastic tapaculo - the White-throated- we went in search for Chilean Tinamou and the endemic Dusky-tailed Canastero. Especially the Tinamou can be tricky sometimes so we were hoping to get that one out of the way as soon as possible. As we walked a small trail through a small canyon we found several Canastero’s and suddenly a Tinamou started calling. Fernando played some tape and the bird got a little closer and after one more try we saw this great bird making its way down the hillside.

For the afternoon we tried several wetlands near Santiago to look for the Salinas subspecies of Black Rail and to hopefully flush a South American Painted Snipe. We put on rubber boots and started our quest, but after 2 hours of walking and flushing dozens of South American Snipes we had to give up, we did hear the Rail – frustratingly close – and found a male Lake Duck. August 23th TAPACULO FIESTA
We left Santiago early this morning and headed south towards the northernmost Patagonian forest in the beautiful Altos de Lircay NP. Our first stop was at a tiny patch of remaining lowland secondary forest along the highway, the absolutely northernmost limit of the distribution of Ochre-flanked Tapaculo.

As we stepped out of the car we heard another very cool Chilean specialty, the Des Mur’s Wiretail. Luckily these peculiar furnarids reminding of the Australian Emu-wrens are very inquisitive and moments later we had fantastic views. The Tapaculo required a bit more effort – people passing by on the highway looked in amazement at the two people crouched next to the road looking into roadside vegetation – but eventually I got exceptional views of this great skulker.

We arrived at Altos de Lircay NP at midday and started our search for two of the best Tapaculos in the world, the Chestnut-throated Huet-huet – another awesome onomatopoeic – and Chucao Tapaculo. Walking through this pristine nothofagus forest was an experience en sig with amazing viewpoints, big beautiful trees and bamboo and fern covered understory.

It took some time before we found the characteristic scratch-marks of a Huet-huet on the trail and after playing the tape we got an immediate response! Two birds started circling us calling continuously and after a tense wait we saw these superb birds crossing the trail, an amazing experience!

While we were busy with the Huet-huets a Chucao Tapaculo started calling and after climbing through some thick understory trying to get an angle I got some fantastic views! Great, both tapa’s were in the bag! To top things of we saw two new woodpeckers, Chilean Flicker and Striped Woodpecker and believe it or not, a 4th species of Tapaculo, a very showy Magellanic Tapaculo meaning we had seen four tapaculos of four different genera in a single day!

We stayed at the wonderful Hosteria De Vilches, a must visit when coming to this great NP! We were joined by one of the owners to look for Rufous-legged Owl, but even after two hours of trying at multiple locations the birds kept quiet… 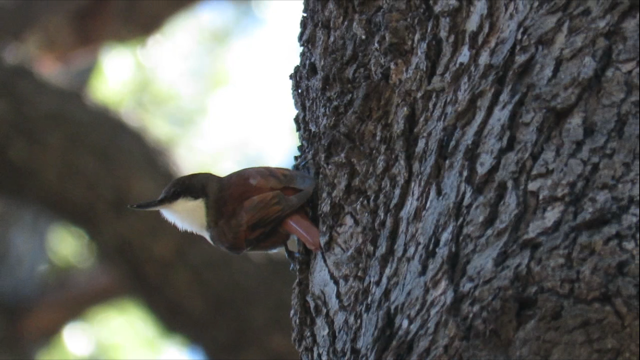 August 24th UP NORTH AGAIN
After trying once more for the owl without success, we drove north towards Santiago again. After six hours on the road – including two hours being stuck in Santiago traffic – we arrived at a small reserve an hour north of the capital. Our only target here was the Patagonian Forest Earthcreeper, an intriguing recently described species that winters here. Before we even got to the actual reserve one of these awesome birds flew across the road and posed for five memorable seconds before it disappeared forever. Great! We had little time on our hands so we decided to continue towards the coast.

Our first stop at the coast was at a Humbolt Penguin colony situated on a small island just of shore. There were dozens of Humbolt Penguins present, great to see since this species is declining throughout its range. A huge bonus was a single Magellanic Penguin, standing casually among its Humbolt cousins. A great catch-up after dipping this species in Patagonia. We found another endangered species in small numbers feeding offshore, the diminutive Peruvian Diving Petrel.

After finding the endemic Chilean Seaside Cinclodes it was time to head back to Santiago in order to escape traffic. August 25th GOODBYE CHILE!
Already my last morning in Chile, I will surely come back to this beautiful country to take things on a more leisurely pace and enjoy the Patagonian forests and steppe in summer :). We left for the coast again to look for my last possible Central Chilean targets. At the parking lot a Dark-faced Ground-tyrant - an austral migrant – was a welcome bonus.

Like a couple of days earlier we put rubber boots on and walked the edge of a small wetland hoping to flush a South American Painted Snipe and like our previous attempt none were present. Well, I guess this elusive wader is another good reason to come back someday.

My last possible tapaculo – Dusky Tapaculo - this trip fortunately proved a lot easier to find and we had good views as the bird skulked circles around us, a typical behaviour for this family.

The best bird of the day was a Stripe-backed Bittern. We found this fantastic little heron in a small patch of reed along the road, behaving like our Little Bittern in Holland, very cool!

We ended this 3,5 day Central Chilean birding tour with a seawatch. Despite the fact that there was zero wind there were thousands of Sooty Shearwaters present offshore, but unfortunately no other new tubenoses. We did find a very welcome Chilean Skua preying on a Sooty Shearwater. We saw the bird hacking away at the shearwater trying to drown it, but after a five minute struggle the shearwater managed to escape unharmed. My last new bird in Chile were two beautiful Red-legged Cormorants flying by.