May 10th ACROSS THE BORDER AND INTO TANZANIA!

Last night after Stratton Hatfield had picked me up from Nairobi airport we spent the night in a hotel not far from Nairobi NP. This morning we met Joseph Aengwo at the NP gate and with Stratton’s Landrover – our home for the next 6 days - we drove straight into the park.

Unfortunately it was raining quite heavily and due to the recent rains the park was generally very wet, which made birding incredibly difficult. So after we ticked Shelley’s Francolin we said goodbye to Nairobi and headed for the Tanzanian border.

We ran into some minor setbacks – first a wrong stamp in our passport, then a motorcycle that ran into us and a medication fee for the drivers’ fake injury - but round 13:00 PM we were finally across the border and on our way to Engikaret, better known as the Lark Plains. The plains got their name because they are the only known breeding site for the critically endangered Beesley’s Lark, a charismatic little lark that is down to only 67(!) individuals.

At the plains we met Furaha Mbilinyi, a local Arusha birder who would join us for today and tomorrow. This was a great thing for multiple reasons because Furaha doesn’t just know Tanzanian birds and birding sites incredibly well, he is also a fantastic dude to hang around with!

After paying a contribution to the local community who watches over the Lark Plains, we started our search for one of the rarest birds in Africa. As we drove out onto the plains the first two new birds we encountered were Greater Kestrel and the stunning Double-banded Courser. It took a while before we found the first larks, but after having fantastic sightings of both Short-tailed Lark and Athi Short-toed Lark we stumbled upon 3 very nice Beesley’s Larks! What a privilege to see these incredibly rare birds in the wild! It is good to see that the community is involved with its conservation and benefits from this species. In my opinion this is the only way to protect this incredibly vulnerable bird.

After this success we drove to friends of Stratton – Adrian and Carmen – who had kindly invited us to spend this and the following night at their place.

We started our day on a role! As it was just getting light I got my 3000th species this year, the Rufous-tailed Weaver!

The bird following that was even better in my opinion, a stunning Lesser Moorhen, an intra-African migrant that I had missed many times before. We than made short work of Ashy Starling, Yellow-collared Lovebird and best, a Tanzanian Red-billed Hornbill.

So far so good, but as we drove back towards Arusha we got our first fine for speeding, well we were doing 40 on a 50 km/h stretch, but lets just say that those Tanzanian cops felt creative today.

Around Lake Duluti we found Brown-breasted- and White-eared Barbet, only my second-ever Green-backed Honeybird and the range-restricted Tavetta Golden Weaver.

As we drove towards a roadside snack bar for lunch we were almost nailed again by a roadside gang of cops, this time they couldn’t catch us for speeding, but they gave it their best to fine us for not wearing seatbelts on the back seat (meanwhile an open pick-up with two broken mirrors, 12 people and 6 goats passed us with 70 km/h).

That lunch was the turning point I guess, since from that point on we were harassed wherever we went. While searching for Lyne’s Cisticola we accidently drove across a dirt road that apparently belonged to some very unfriendly Masaai, instead of helping us to get where we were going they threatened and harassed us until we had no other option than to pay them. On the next road we tried exactly the same thing happened, this time the guy we had paid ran off into a cornfield never to be seen again.

By now we seemed to have lost all our momentum and on our way back to Arusha – dipping Hartlaub’s Bustard en route – we were pooled over again. Like last time we had done absolutely nothing wrong, but by some miracle this cop managed to turn our 40 km/h into 60.

Tired from all the fines and 50 dollars lighter we drove back to Adrian and Carmen’s place for a well deserved braai, but not before we were pooled over one last time, this time Strattons’ fire-extinguisher had the wrong label on it (I shit you not)…

May 12th UP INTO THE USAMBARAS!

We left Arusha very early – so we would beat traffic – and headed east towards the Eastern Arc Mountains, our goal was to reach the Western Usambaras by late afternoon.

On our way we tried hard for African Finfoot and African Skimmer, but our efforts proved fruitless. What we did find at our 5th try was the notoriously difficult to find Rock-loving Cisticola.

We arrived at Mullers Mountain Lodge in the Western Usambaras around 5 PM and after checking in we raced straight for the famous Sawmill Road, however it was gradually becoming dark and we could only get 3 or 4 specialties before we had to call it a day. Tomorrow we will chase some top-notch birds!

We drove up to the sawmill road when it was still dark, now and then listening for Usambara Nightjar and at our 5th attempt we hit the jackpot with a calling bird.

At the crack of dawn we were on the sawmill road with a very specific target list. By now I’m beginning to run out of species in East Africa so all my targets are pretty much hard to find, rare and endemic birds.

We got our first Usambara endemic on the road while driving up, the recently split Usambaru Thrush and as it was slowly getting light we could hear White-breasted Alethes and Spot-throats calling from every direction, seeing them however proved incredibly difficult.

We hit the first mega only an hour after arrival when Stratton brilliantly picked up a pair of the rare Usambara Weaver, feeding and calling in the canopy, this bird can often be one of the harder birds to come by in the Western Usambaras.

By midday we had notched up most of the targets, but we still had to see a Spot-throat and a White-breasted Alethe and the rarest of them all, the Usambara Akalat, was still lacking from our list.

We decided to go off road and straight through the forest, parallel to the road hoping to come across one or two skulkers.

Suddenly we simultaneously picked up a movement in the undergrowth, I lifted my bins and there it was, an Usambara Akalat, one of the hardest East African birds to come by. It turned out to be a pair feeding on a small ant swarm. The fact that they were feeding meant that we could even take some reasonable pictures of this rarely photographed species. There were more birds attracted to the antswarm and at one point I had an Akalat, an Usambara Thrush and a Spot-throat in one frame, ridiculous!

As you can imagine we savoured our Kilimanjaro beer that evening after cleaning up the Western Usambaras.

May 14th FACE TO FACE WITH THE NDUK

We left the Western Usambaras early and drove to the Eastern Usambaras, about half a day drive since the last 30 kilometres up to the Amani Forest Camp are on a bad dirt road, to me this only adds to the adventure.

We had a warm welcome at the Amani Forest Camp by the very hospitable hosts and as Carl is a chef we enjoyed an outstanding lunch while we scored our first two mega birds right in the garden, Uluguru Violet-backed Sunbird and Banded Green Sunbird.

After lunch we met our guide John with whom we drove down to a small creek, the apparent stakeout for the near mythical Dappled Mountain Robin. On our way down we saw a Half-collared Kingfisher.

Half expecting not to hear or see even a glimpse of the bird I played the tape upon arrival at the site – nobody had seen it here for a long long time – but immediately Stratton heard the bird responding, I however missed the call completely. We waited for a while and I played again, almost immediately two birds zipped right over my head. Stratton got good looks, 100% Dapplethroat, but I only glimpsed it, not remotely enough for a tick. We tried for 3 more hours, but without any luck. We did have great looks at another rare robin, the Sharpe’s Akalat.

After this debacle we went in search for another mega rare bird, the Long-billed Tailorbird. Here we had better luck with brief views of a single bird as it skulked through the bamboo. One down!

While enjoying an outstanding dinner at the Amani Forest Camp, we suddenly heard a calling Nduk Eagle Owl, the absolute flagship species of the Usambaras. We raced down into the forest, but the bird didn’t call again.

John told us that recently a pair proved reliable at the botanical gardens so we drove down there. Just as we opened the door of our car we heard the bizarre call of an Nduk Eagle Owl somewhere in the canopy next to the road, in the distance another bird responded. Now we had a problem, the bird was somewhere high up in the canopy, completely hidden from sight and despite shining our torch from multiple different angles, we just couldn’t see it. Suddenly some dogs started barking on the premises where we were standing on, which apparently spooked the bird. It flew to another tree and there we finally got amazing views. What a fantastic bird, definitely one of the absolute East African highlights this year! 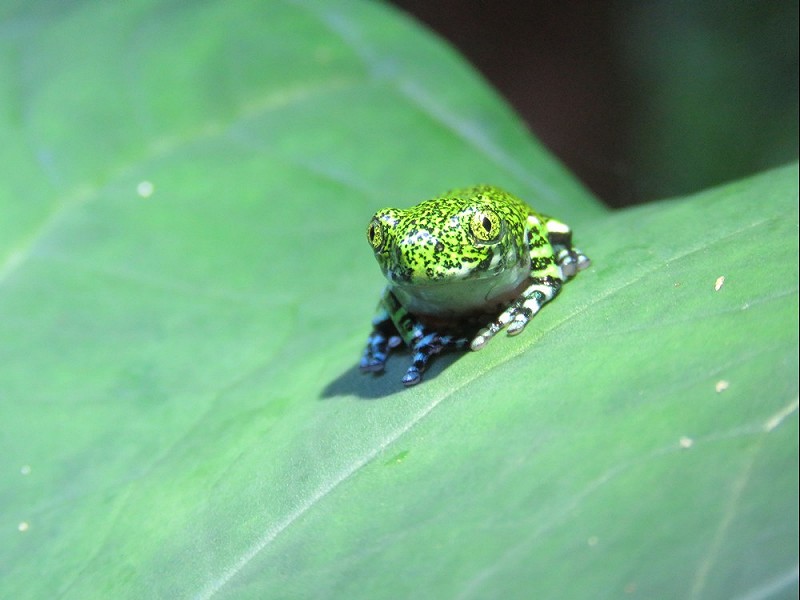 May 15th RUNNING OUT OF NEW BIRDS

We had done incredibly well yesterday, which meant that there were just three birds left to find for us in the Usambaras, the Dapple-throat, the Kretschmer’s Longbill and the Usambara Hyliota.

We tried the full morning for the Dapple-throat, but it never called, let alone showed again. Our search for the Longbill eventually paid off, but it took more than two hours of off-trail hiking up and down hillsides before we finally got it.

The whole afternoon we focussed on the Hyliota in a forest patch at 400 meters altitude, but despite our efforts we had no success. Despite a full day grinding through the forests of the Usambaras we only got three new species, than you know it is time to move :(

We spent the whole morning looking for the Hyliota, but at 9 AM we had to reluctantly end our search since I had a flight to catch to Antananarivo!

Joseph, Stratton and me had a lot of fun on our last drive together this year, back to Arusha, but despite several stops we just couldn’t find a single new species and by the time I reached the airport it became clear that this was my first 0 species day… Tomorrow I’ll be in Madagascar where everything will be new!

Thanks Stratton and Joseph for these awesome seven days. We had to work hard for new species, but we did get some incredibly rare ones!