We left the Hatfield residence early and headed east towards the coast, part two of our Kenya mega tour would focus on Tsavo West, Tsavo East, the Taita Hills and the famous Arabuko Sokoke Forest. Our first destination was Tsavo West, where we were hoping to pick up some dry country species that we’d missed in Samburu/Shava.

The drive was long and hot and we finally arrived at the gate around 3 PM. As soon as we entered the park our ‘bird drive’ began and since it had rained a lot lately the normally bone dry park was now lush and green and teeming with birdlife!

Jacobin Cuckoos, Straw-tailed-, Pin-tailed- and Long-tailed Paradise Whydah were everywhere and we found several nice flocks of starlings which materialized in the uncommon Shelly’s Starling. It was Ethan who was the man of the hour when he picked out a Red-naped Bush-shrike on call, subsequently we had fantastic views of a pair.

Other great finds were Three-streaked Tjachra, Tiny- and Ashy Cisticola and Scaly Chatterer, but to me the sheer numbers of cuckoos was the undoubted highlight.

It was almost dark when we arrived at the beautifully situated Rhino Valley Lodge and while we had a cold beer under the stars two Freckled Nightjars started calling, it doesn’t get any better…

We left Rhino Valley Lodge early and drove through beautiful Tsavo West NP towards the Taita Hills, home of Kenya’s most threatened birds.

Driving through Tsavo towards Taita meant a 40 km long game drive through the park which took us 4 hours because birding was just fantastic. The park was crawling with migrants and intra-African migrants and in addition to this feast we connected with a great number of specialties like Pygmy Batis, Pale Prinia, three more Red-naped Bushshrikes, African Moustached Warbler and Hildebrandt’s Francolin. Another definite highlight was the exquisite male Lesser Kudu crossing the road, surely one of the better looking antelopes.

We had lunch at a roadside lodge when suddenly I picked up a tiny Peregrine-like falcon with buff-coloured underparts and a contrasting white throat overhead. At first I identified it as a Barbary Falcon, but in retrospect I think it was almost certainly a Taita Falcon. Such a shame I didn’t get any pictures of the bird, because Taita Falcon would be an incredible rare sighting.

At the Taita Hills we were met by local guide Nathanial, a very friendly guy who is also involved with conserving the last forest patches remaining. These tiny remnant forest patches form the last stronghold for the critically endangered Taita Thrush and Taita Apalis and the endangered Taita White-eye. With a population of less than 300 birds for both the Thrush and the Apalis these species are among the rarest and most threatened birds in Africa. Besides these birds the Taita Hills are home to three endemic mammals and a whole lot more insects, plants, reptiles and amphibians and it would be such a waste if these last remaining forest patches were cleared to make way for agriculture.

Nathanial took us to the most accessible forest patch and there we started to walk quietly through the forest, watching for any thrush-like movement on the forest floor. The first two hours we did not see or hear a single bird, maybe one or two sunbirds and bulbuls, but that was it. I was beginning to worry when suddenly Ethan heard the contact call of a Turdus. We stopped and scanned the understory and suddenly I saw a male Taita Thrush! Yes! There was not one, but three birds together! Fantastic.

Now we had one hour to find the Apalis, but at the most well-known stakeout we failed to find any. Again we started to worry because time was ticking and we had to get off the mountain before dark. Luckily Nathanial had another stakeout and there we were victorious, we saw a fantastic pair of Taita Apalis, mission accomplished!

The White-eye was luckily not too difficult and we could leave the Taita Hills with our heads held high!

After spending the night at Segala Lodge and some quick birding on the premises, we headed for the Arabuke Sokoke Forest, one of east Africa’s most famous birding localities. This large track of coastal lowland forest is one of the last remaining heavens for several threatened (endemic) species and is on top of every site list for serious birders visiting the Kenyan coast.

The drive from Segala to Sokoke was a long and tough one since it requires using the Mombassa road, one of the worst in the country. Luckily we had Zareck behind the steering wheel and he managed to get us all savely to the gate of Arabuko Sokoke Forest where David Ngala was already waiting for us. David is a legend, he has been guiding and birding in this forest since 1983 and knows every sound, stakeout and behavioural characteristic of every bird.

With David we started our afternoon birding session. During those 2,5 hours we found some fantastic birds like Pale- and Forest Batis, Litle Yellow Flycatcher and Amani Sunbird. We heard a Sokoke Pipit, but since it was getting dark we could not actually see the bird. I sincerely hoped to connect with this most wanted species tomorrow!

We had a full day of birding in the forest with David today, targeting all the mega birds of Arabuko Sokoke Forest.

We started off well with the range restricted Fischer’s Turaco and Mombassa Woodpecker, both put on a fantastic performance. I’m especially a huge fan of the Turaco, another amazing member of an amazing African family.

After these early successes we went for one of the harder to find specialties, the threatened and incredibly shy East Coast Akalat, reminiscent of our European Robin, but much harder to find. Only after about half an hour of listening we finally heard one and it took us another half hour to all get eyes on the bird as it zipped back and forward through the understory. While trying for this bird I briefly saw a Golden-rumped Elephant-shrew scurrying past, too bad because it would have been fantastic to see this incredible endemic mammal well.

Next we went for a true Kenyan endemic, the Malindi Pipit and after a short walk through an open plain next to the forest – and lots of African Pipits – we found two that allowed great scope views.

Before lunch David took us to his stakeout for one of the flagship species of Sokoke Forest, the aptly named Sokoke Scops Owl. David left us waiting on the track and disappeared into the forest to – hopefully – locate a bird (he does this to cause minimal disturbance to this endangered species). It took half an hour or so, but than he reappeared with a smile on his face, he had found one! We followed him deep into the forest and before we knew it we had fantastic views of a female Sokoke Scops Owl, wow!

After lunch and before picking up David at the gate again we paid a visit to one of the coastal resorts where we soon found the mixed colony of Golden Palm- and Eastern Golden Weavers. Another good find were several Brown Noddies feeding out at sea in a big group of Terns.

The entire afternoon in the forest was focussed on finding a Sokoke Pipit, my most wanted bird for this part of the trip. It took us at least two hours of walking through the forest before we finally heard a liberating high pitched call and another 10 minutes of carefully scanning through the undergrowth before I finally saw it creeping across the forest floor. What a fantastic bird and surprisingly similar to the Siberian Pechora’s Pipit! 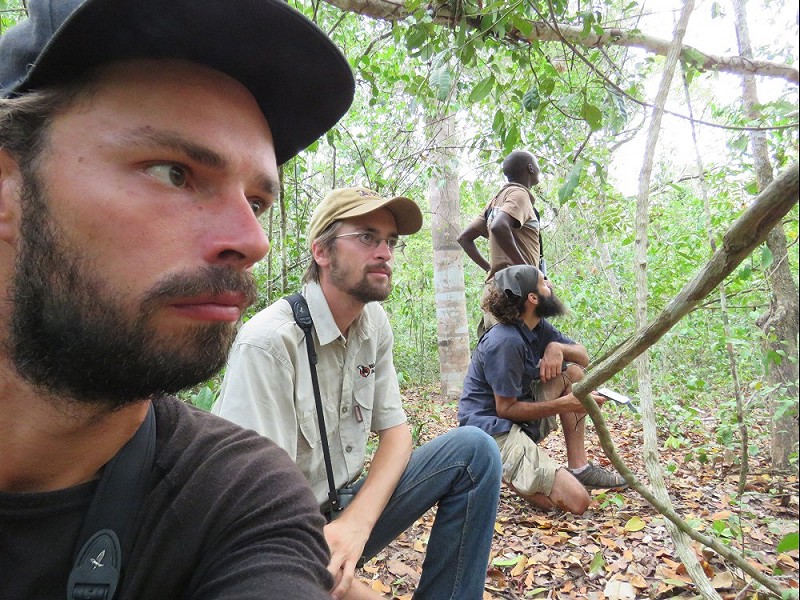 It was raining quite heavily when we woke up, so instead of heading straight into the forest to look for the next-to-impossible Clark’s Weaver, Ethan and I decided to do a sea watch. This proved a great decisions as we had several Roseate Terns flying past at close range, a new African species for Ethan and a great Biggest Year tick for me!

Despite the rain we tried hard for Clark’s Weaver with David, but to no avail. We signalled our defeat and headed toward Lake Jilore, en route picking up the range restricted Scaly Babbler.

We had two targets at Lake Jilore, both of which we found easily thanks to the spot on guiding by David, he truly is one of the most experienced guides I’ve ever had the pleasure of birding with and I can highly recommend him as THE guide for the Arobuko Sokoke Forest!

After dropping off David we drove to the eastern gate of Tsavo East. At the gate we looked thoroughly for Somali Sparrow, but we could only find 1st or 2nd generation hybrids with the introduced House Sparrow. We also found out that in order to get a ticket for the park we had to drive 100 km to the other side of the park, in just three hours, which meant that birding en route had to be swift and effective.

Thanks to the recent rains birdlife was abundant and there were Golden Pipits and Fire-fronted Bishops everywhere. Other good finds before we exited the park were Black-bellied Sunbird and white-headed Mousebird.

Our last morning in Kenya was spent looking for the Quail Plover, which Callan Cohen had seen here two weeks prior. Despite a thorough search we couldn’t find the bird, but luckily the stunning Pangani Longclaw was pleasantly common.

The rest of the day was spent driving across the horribly busy Mombassa road to Nairobi Airport.

And now off to Uganda!