February 21th FLOWERPECKER BONANZA
Upon arrival in Davao, Mindanao, the largest island in the Philippines, we were met by our driver arranged for us by Pete Simpson. We were driven straight up to an area about half an hour drive from Davao. At this site a trail runs high up the mountain and along this trail some nice species can be found that are endemic to the island of Mindanao.
The main attraction at this site are the flowerpeckers and probably nowhere else on earth a greater variety can be found. Among these Flowerpeckers is one very rare one, the Whiskered Flowerpecker which is only reliable at this specific site.
As we walked up new birds kept pouring in since about every bird we saw was endemic to Mindanao or to the Philippines as a whole. Our first new bird was of course a Flowerpecker, the beautiful Red-keeled and not long thereafter we struck gold with a Whiskered Flowerpecker that perched right in the open. At the end of the day we counted no less than 7 Flowerpecker species!
Another highlight was the endangered endemic Pinsker's Hawk-eagle, the Mindanao Hornbill and our last Falconet species, the tiny Philippine Falconet.
One target was still lacking, the rare Cryptic Flycatcher and exactly at the stakeout given to us by Pete we found a territorial pair.
After this fantastic day we ate at the best BBQ place in Davao, not a bad way to end this day with 30+ new birds. Tomorrow we will go for my all-time most wanted bird, the Philippine Eagle... 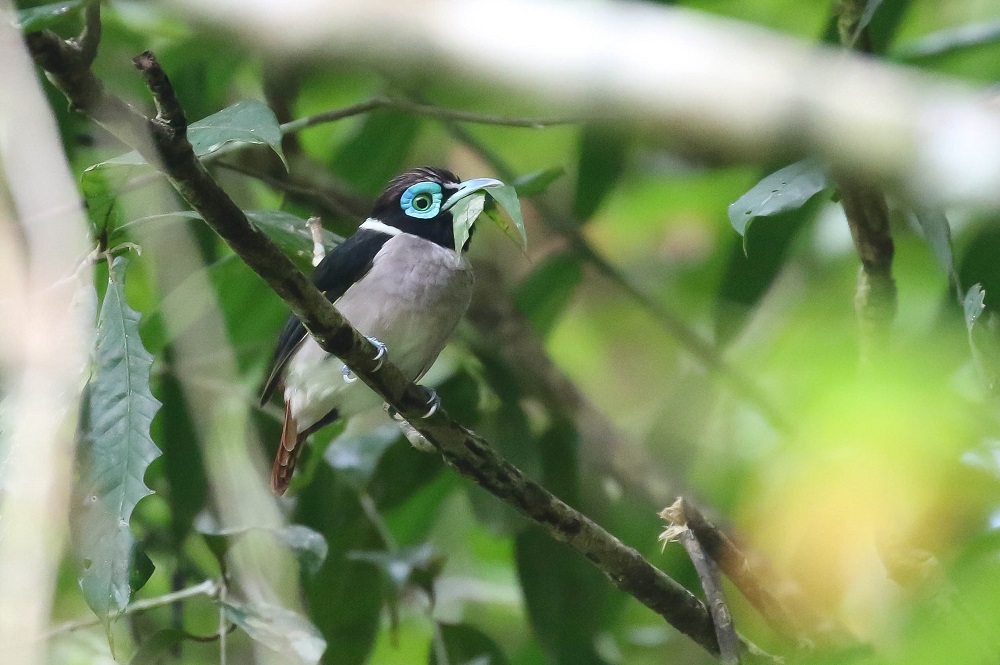 
February 22th MY ALL-TIME MOST WANTED BIRD
What is a Biggest Year without the biggest, baddest bird of them all?
There is one bird in particular that I've been longing to see since I was a little kid, the majestic Philippine Eagle. When people ask me 'what is your favorite bird?' I always answer 'Philippine Eagle'. For many different reasons the Philippine Eagle ranks as the number 1 most wanted bird for me and in fact for most world-birders. 1) It is humongous. 2) It prays on monkeys and deer. 3) It is absolutely stunning with a wild crest, pale eyes and huge bluish bill. 4) Sadly it is incredibly and exceedingly rare with less than 100 pairs in the wild. 5) It is endemic to the Philippines, one of the most fascinating, diverse and most threatened bio zones on the planet. 6) It is difficult to find since it is a forest-dwelling eagle that only rarely soars.
Today was the day that we would hopefully see one in the wild. Pete Simpson had made special arrangements for us in a tribal area on the slopes of Mt. Apo National Park. At this site an Eagle hatched more than 2 years ago and since juvenile Philippine Eagles stay with the nest for more than 1.5 years sometime, it was still lingering in the area along with its mother. The birds' father was sadly shot. Why you ask me. Well for us westerners it is hard to grasp that anyone would harm the most incredible animal on the planet, but there is a complicated and incredible sad story behind this.
The Philippine Eagle Foundation worked hard to convince this tribe that by protecting these birds and their nest they could benefit financially from the birders that will come to see them. This all went well until a tour operator told them that they could make a whole lot more money via this practice by charging birders double or triple. This caused corruption within the tribe; only a very small percentage of the villagers earned a lot of money from showing people the eagles and the rest of the tribe felt - and correctly - excluded from these benefits, so out of anger and frustration they shot the father bird. That hurts doesn't it?
There is a little bit of light at the end of the tunnel since recently a new adult male came in the area and is currently displaying to the female bird, so hopefully the nest will be occupied again in the near future. If there is still any forest left by that time (we could hear chainsaws and see smoke drift up from the forest in this 'protected' area).
Anyways, after a 3 hour drive in the back of a pick-up, paying several different permits and making multiple donations to different fractions of the tribe, we finally arrived at the site; a forested valley at 800 meters altitude. From the viewpoint we could clearly see a huge nest some 100 meters below us in a large dipterocarp tree. We could also see the nearby hillsides were already cleared of forest... That is how bad it is in the Philippines.
The waiting game started...
Only one hour in we suddenly heard Macaques and crows alarming down in the valley and that's when we heard the incredible piercing whistle of an Eagle. Goosebumps everywhere, the king of all birds had arrived on the battleground, but we still couldn't see it. Then I noticed two crows calling at something in a tree on the opposite side of the valley and there it was, looking even larger and more amazing than I could have possible imagined, the Philippine Eagle.
We gasped at the bird for more than 15 minutes before it disappeared out of sight leaving two baffled Dutch birders behind. Another half an hour later it started calling again, but wait we didn't see the juvenile bird fly and this call came from the other side of the valley! A second later Max picked up a huge shadow gliding over the forest, the adult female! Holy s£$%t!
We had seen not just one, but two Philippine Eagles on one day. Something that not many can say and a sight that will become even rarer in the very near future. 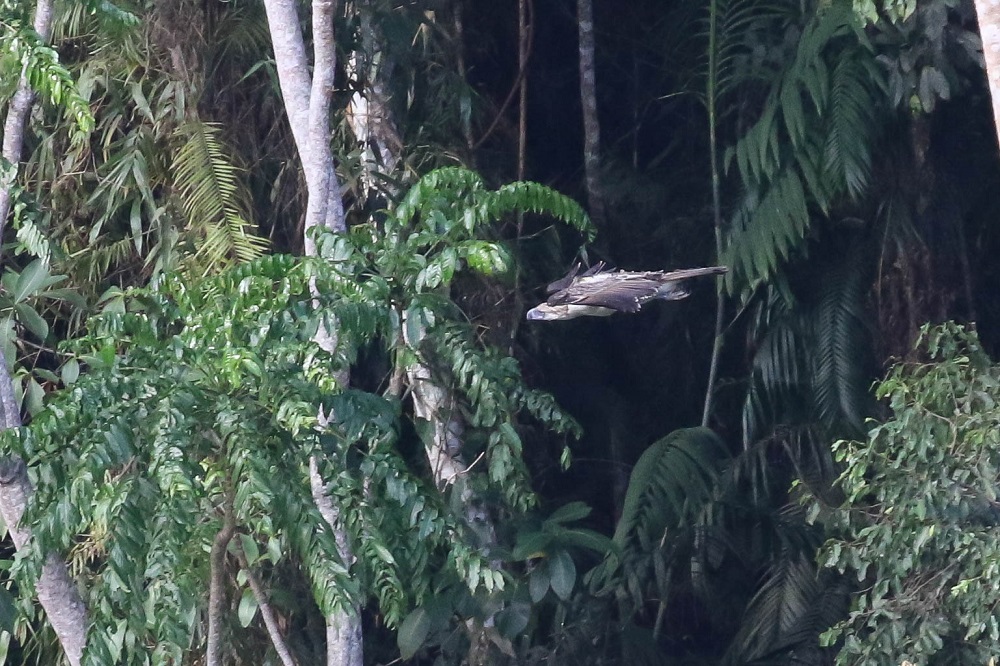 February 23th THE PICOP CHAINSAW MASSACRE
Last evening we took a 6 hour minivan-ride to Bislig, the gateway to a legendary birding area named PICOP, an army controlled site that contains Mindanao's last tracks of remaining lowland forest. The situation however is dire. How dire exactly we would experience today...
We met our guide Zardo Goreng 3:30 AM at the Paper Country Inn hotel. Zardo is the best local guide by a long shot and he knows better than anyone else where to find PICOP's star birds. We are talking about several of the rarest birds on the planets, birds that face imminent extinction in the very near future.
After a bumpy two hour drive in an old jeep we reached 'the old cemetery', one of the last viable pockets of lowland forest on Mindanao. Right at the crack of dawn we began to hear and see new species all around us, from the absolutely stunning Philippine Trogon and the increasingly rare Writhed Hornbill to the bizarre looking Black-faced Coucal. We also recorded a bird that Zardo hadn't seen in over 10 years, the Blue-backed Parrot, a bird believed to be locally extinct! Almost the same goes for the Philippine Leafbird, the Philippine Dwarf Kingfisher and the nearly extinct Little Slaty Flycatcher we saw.
The sad thing was that every pocket of remaining forest that contained these smashing species was surrounded on all sites by completely degraded habitat, from secondary shrubberies to barren limestone plains (Ones the trees are gone there are no roots to support the soil so it all gets washed away in the monsoon, by logging the forest these poor villagers are raping the very land they live on). This is due to the fact that these poor local villagers cut down the last remaining dipterocarp trees to sell as hardwood and the smaller trees to burn and sell as charcoal. This of course has a devastating effect on the forest and ones this forest is gone everything that lives in it is gone to. The worse thing is that the Philippine government is doing absolutely zero about this situation and in all likelihood the remaining forest will disappear in less than 5 years. To make things worse an air survey conducted on Mindanao shows that besides PICOP and 1 other small stretch of lowland forest on the western part of the island, all lowland forest on this large island is already gone, what remains is completely unprotected. This implies that if the forest at PICOP is gone, more than 10 bird species will disappear forever... My advice would be to go there before it is too late, tell and show the world that what is going on here is unacceptable. In Holland we have all these 555 rallies for humanitarian disasters like earthquakes and Tsunamis, but why do we never hold such a rally to do something about one of the biggest ecological catastrophes in the 21st century, the uncontrolled logging of lowland forest throughout Southeast Asia? The only solution I see is to buy the remaining forest at PICOP and put a fence around it, or else the birds in the pictures below WILL BE GONE in the very near future. Since this will of course not happen the end of PICOP's incredible birds seems inevitable. I would be devastated if that happens and you my friend should feel the same...
Ok back to some more positive stories, because we did see some incredible birds today! The absolute highlight was to stumble across an Azure-breasted Pitta on the nest - we accidently flushed a bird from a small palm tree on the side of the trail, in the crown of this tree we found the nest - and while looking at the Pitta we suddenly stumble across a Philippine Frogmouth in the same tree!
We ended a massive day with more than 50 new species on PICOP's old airstrip that is surrounded by a large swamp. The birding here is quite spectacular and we saw Blue-breasted Quail, Middendorf's Grasshopper-warbler, the endangered Philippine duck and best of all several Eastern Grass-owls hunting on over the sides of the airstrip around dusk.
We had an incredible day, but I have to see this is the most shocking ecological disasters I have ever witnessed with my own eyes. I went to bed with a very contradicting feeling in my stomach... 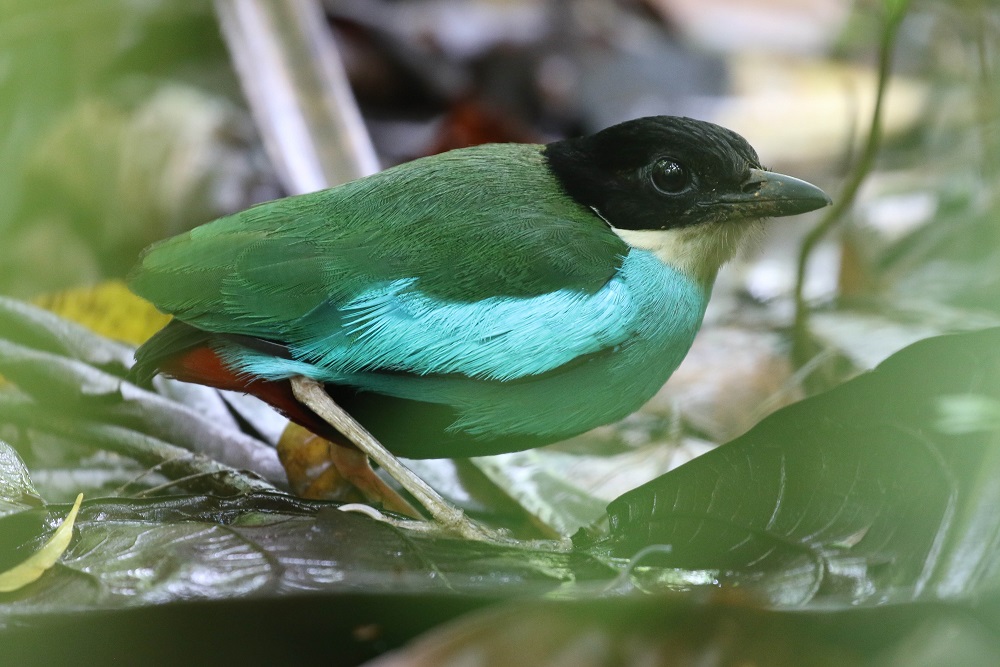 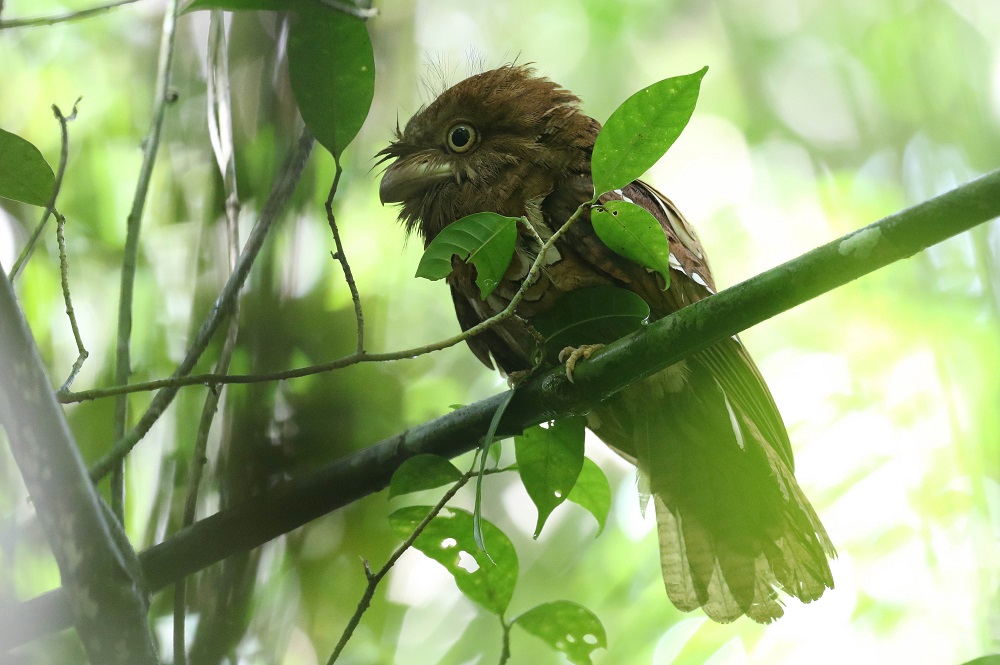 February 24th PICOPS LEGENDARY BIRDS
Today we joined Pete Simpson and Zardo Goreng and 6 guys of a Birdtour Asia group they were guiding. Besides having a blast with this group the birding was phenomenal and Pete told us this day turned out to be one of the best he ever had at PICOP. We had scope views of our last remaining Mindanao Hornbill, the stunning Rufous Hornbill, we found another Azure-breasted Pitta and saw the incredibly difficult to see Hombron's Kingfisher and the handsome diminutive Silvery Kingfisher, but best of all must have been that Mindanao Wattled Broadbill careering nesting material. This is a bird that very few birders ever get to see at PICOP and this may well be one of the first birds to disappear forever. While watching this global rarity we were accidently standing in a swarm of tiny biting ants which caused quite the spectacle (the Americans were joking that that's how Dutchman celebrate seeing a new species, by jumping half naked across the road while scratching all over).
We also heard the spectacular Celestrial Monarch, but besides our efforts this most-wanted bird remained out of sight. 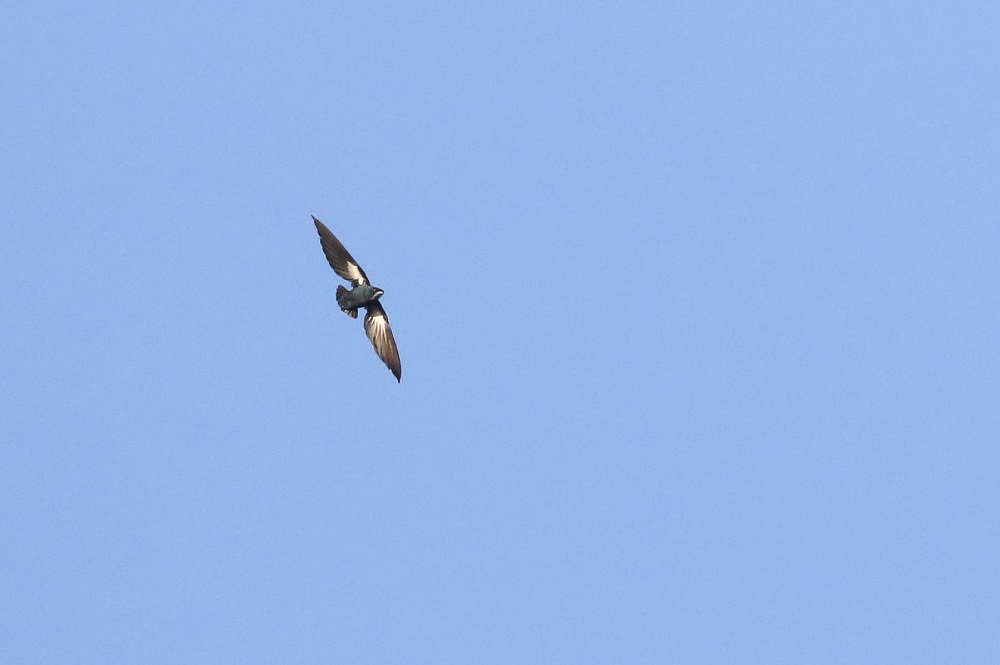 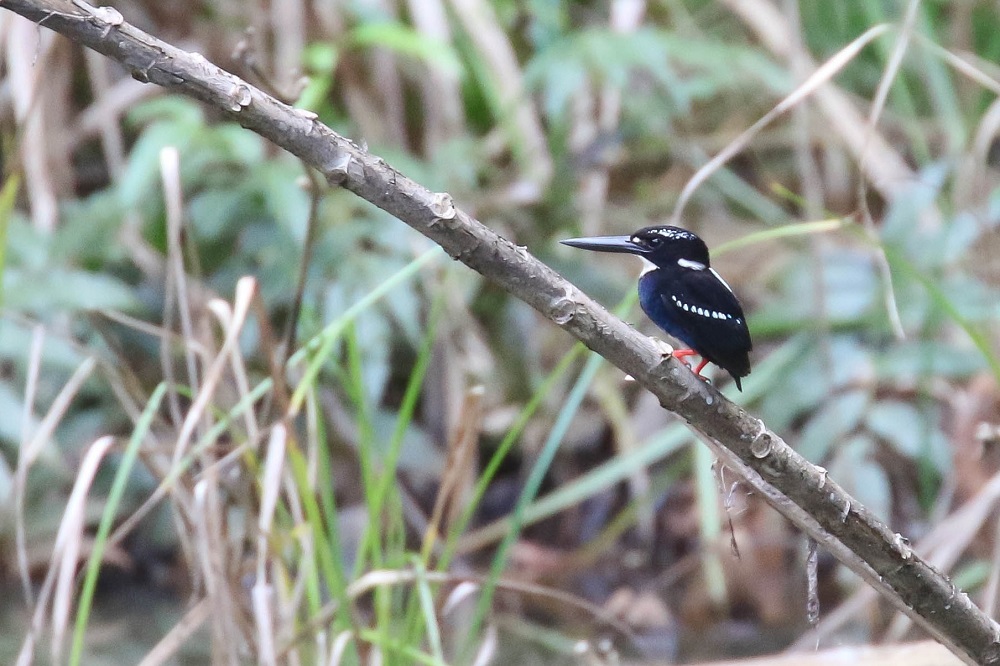