We had arrived at Fraser's Hill around 3:30 AM after a delayed evening flight and a 3 hour drive so when we tried for Malaysian Whistling Thrush around 7:15 AM we felt a bit shaky on our legs. The Whistling Thrush was not home so we started birding in the surrounding forests of this colonial-style hill station. We quickly heard the endemic Malaysian Partridge and notched up most of the commoner high elevation birds in quick succession, but around midday things got very slow and the lack of sleep and hot sun mend that we had to take a little rest (a rare thing during my Biggest Year).
After that little rest we were back in the game and that little bit of extra energy surely helped to find the absolutely stunning Blue Nuthatch and the two more difficult laughingthrushes: Black- and Malaysian. After this tiring day my bed felt very good, tomorrow a new day to go the full 100% again!

February 17th FROM PRE-DAWN TO PAST-DUSK
After a good nights' rest we found ourselves with new found strength at the Whistling-thrush stakeout, but despite our efforts, no Thrush. No time to waste! We drove down to the Gap and back up again - it is a one way road up - to a stakeout for Marbled Wren-babbler. We played the tape, but the bird kept quiet, this wasn't going as planned. Jelmer and I walked a bit up to try another gully when suddenly Jelmer picked up on a strange 4-note Trogon call, we made some recordings and it sounded spot-on Cinnamon-rumped Trogon, 800 meters above its normal range and possible a first record for this site! While recording the trogon suddenly a Marbled Wren-babbler started singing and after 20 minutes of peering into thick undergrowth only I managed decent views. And I'm sorry to say this guys; what a stunning bird!
After Fraser's Hill we drove down to Merapoh, the far less well-known entrance on the other side of Taman Negara. The afternoon session at this location was a bit slow, but I still managed a couple of descent year-ticks. The real birding started after dusk when we had both Gould's- and Blyth's Frogmouth and 2 Reddish Scops-owls calling! It is rare to get all your target nightbirds in one go, let alone 2 lifers! 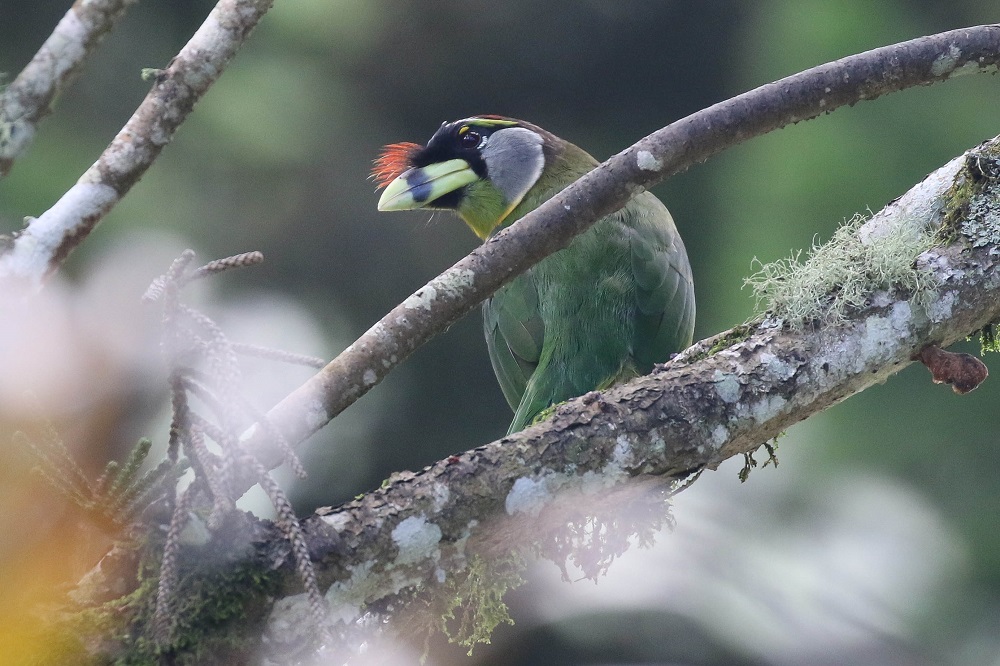 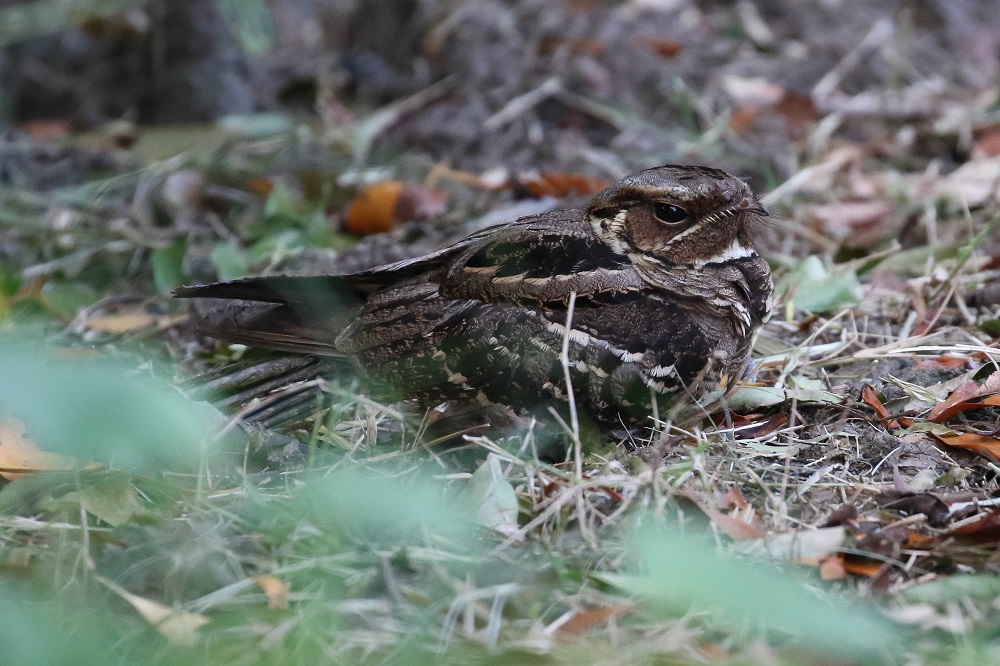 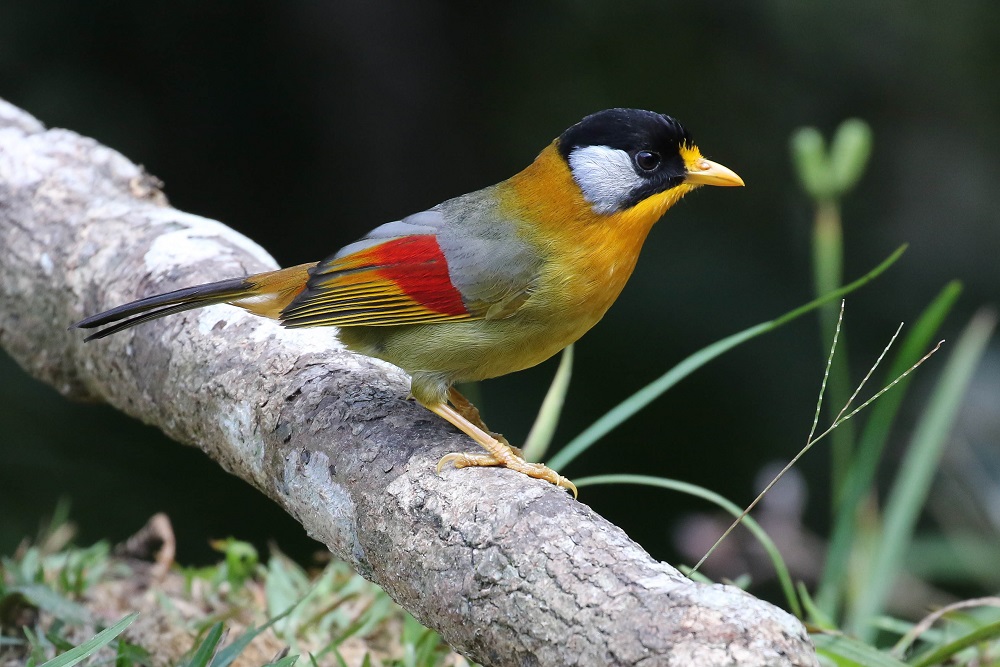 February 18th A FLYING DINOSAUR
The morning at Merapoh started well with a calling Green Broadbill that after a short playback showed well to all of us. The rest of the morning was not spectacular, but we heard both Garnet- and Malayan Banded Pitta that both - like true Pittas - managed to stay out of sight.
It got a whole lot more interesting when suddenly we heard the bizarre duet of a pair of Helmeted Hornbills not that far away so we rushed down the road to find them. The song of this Hornbill must be one of the most fantastic bird sounds in the world, but it is also one of the loudest which mend that they could be in any tall tree in about a kilometre radius. Suddenly Max was on one of the birds and shortly thereafter we watched this amazing bird through the telescope. What a shame that these majestic dinosaur-like birds are currently being driven to the brink of extinction; all because of the demand for 'yellow ivory'.
When we were finished at Merapoh we drove all the way to Kuala Tahan, at the other side of Taman Negara NP (this is a 3 hour drive, which will give you an estimate of the size of this huge park). Here we met our friend Thomas van der ES and his girlfriend who were also on a birding trip through Malaysia. They told us that birding was tough and that it was very quiet, so we knew we had to work hard to find most of the parks' target species tomorrow. 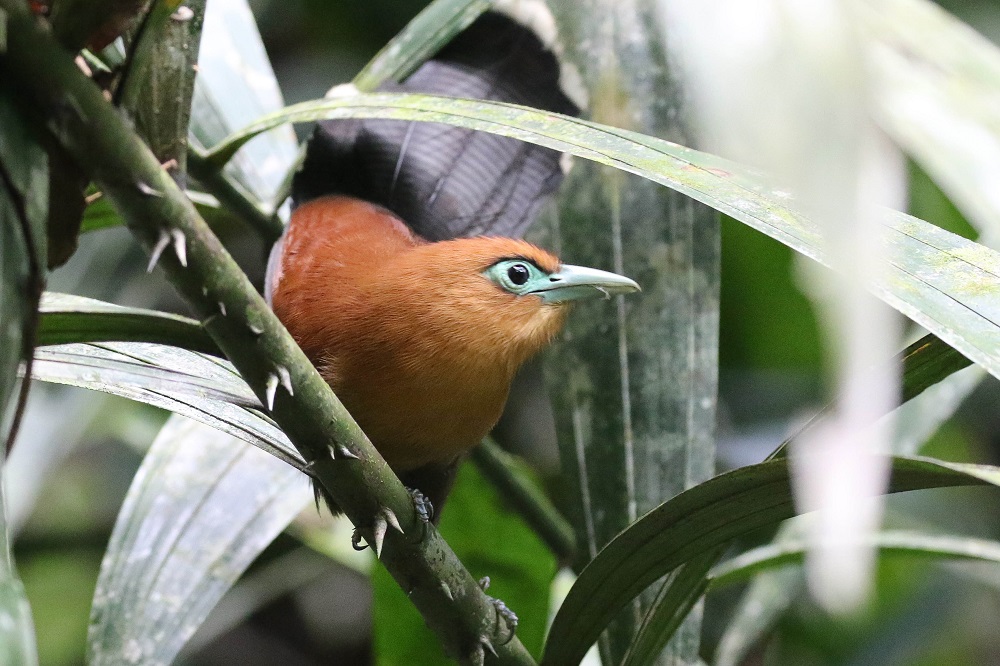 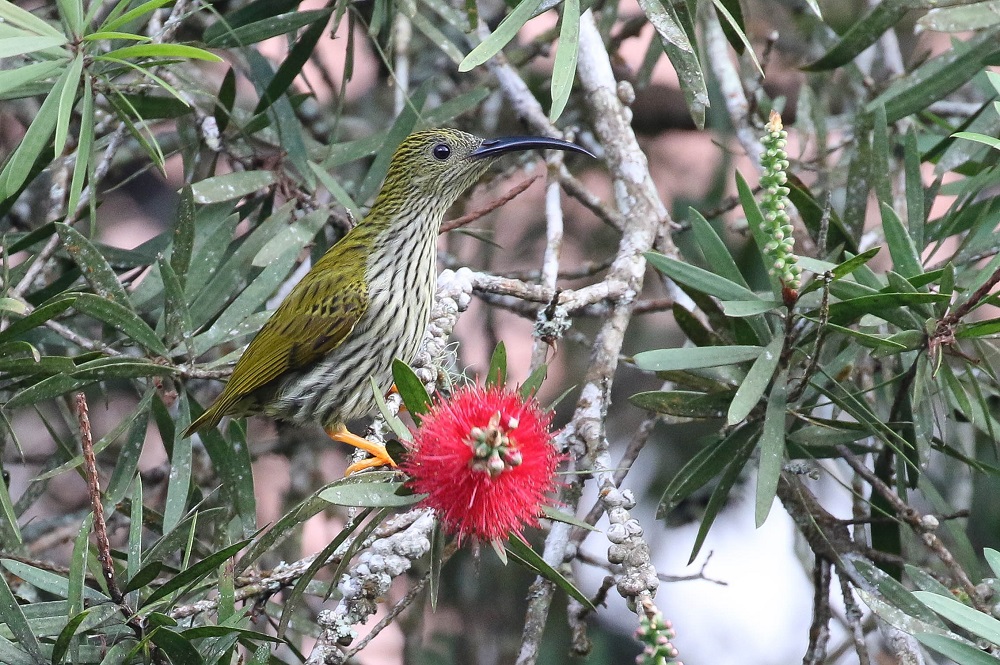 February 19th RAILING IN THE RAIL-BABBLER
For any birder visiting Taman Negara there is one bird in particular that is on top of the wish list, the ground dwelling Rail-babbler. I saw this enigmatic species exactly 10 years back, when I camped for more than a week in the park, back than it took me no less than 6 days to finally see one... Rail-babblers are already thin on the ground, this year they seemed especially difficult to find due to El Nino.
We decided to hit the river trail in the morning, we started walking pre-dawn to get as far away from the lodge-grounds as possible to hopefully get some of the more shy and uncommon species. The birding was not exactly what we'd hoped for and besides Black-throated Babbler, Large Green Pigeon and the rare Brown-chested Jungle-flycatcher, there was not much of else of note.
In the afternoon Sander and Max decided to take a nap and Jelmer and I grinded on through the dead-of-the-day along the Jenet Muda trail. As we were working our way up the hillside - dripping with sweat - I now and then played the song of Rail-babbler when suddenly I got a response. When you hear the pure melancholy whistle of a Rail-babbler the hair in your neck go up, it's that exciting. Now that we'd found one came the difficult part, actually seeing it since there are very few birds that are harder to see. It took us eventually more than half an hour of whistling, creeping through thick jungle, waiting and sweating before finally we both got gripping views, what a bird!
After that we kept momentum and not long after the Rail-babbler we obtained fantastic views a pair of Large Wren-babbler and the rare Striped Wren-babbler. We finished off with a Blue-winged Pitta on the boardwalk! Naturally the other guys were a bit shaken after we told them about our afternoon tally... 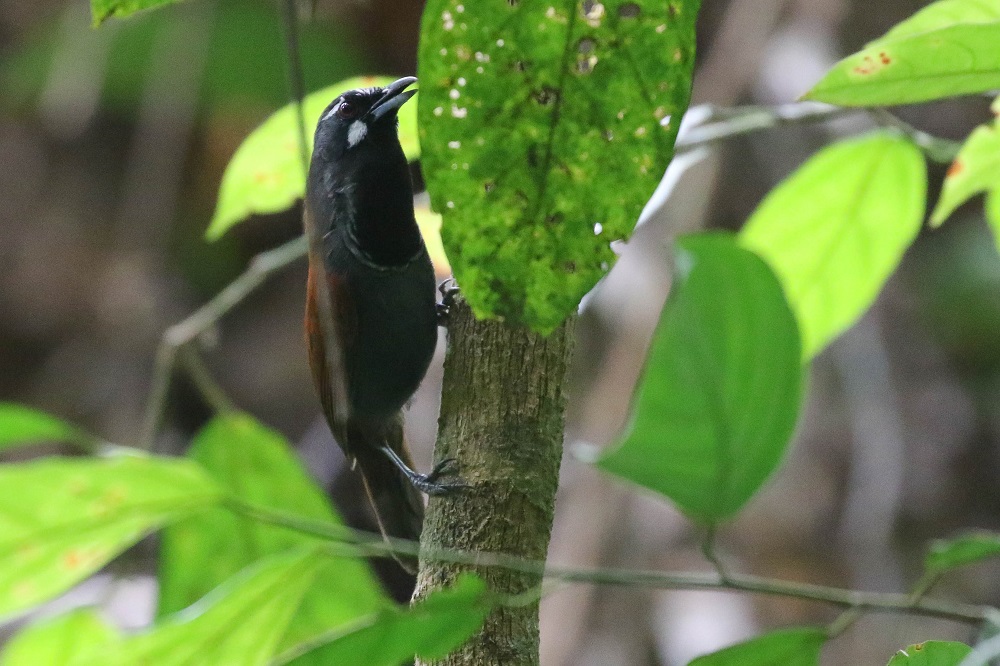 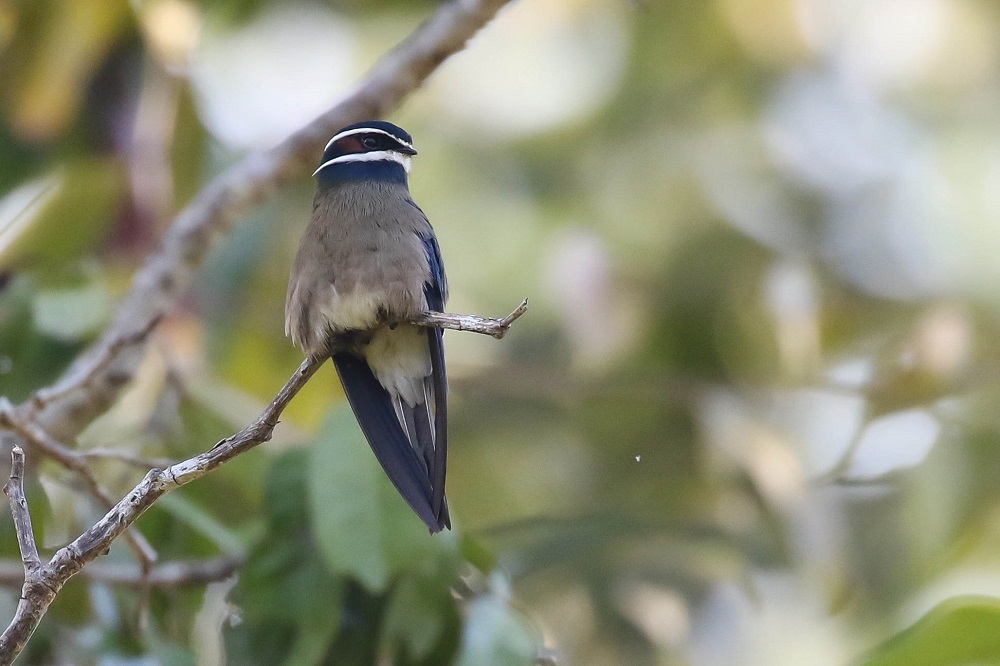 February 20th ONE LAST LONG DAY IN MALAYSIA
Already our last day in Malaysia. Of course we started on the Jenet Muda trail to look for the Rail-babbler with the other guys, but not before we first stumbled on a fantastic Blue-winged Pitta, followed by a group of 4 Crested Firebacks including a displaying male on the boardwalk and finally 2 Black Magpies calling in a tree overhead. Not a bad start! The Rail-Babbler was calling at more less the same location, but this time nobody managed any views of the beast.
As we continued along the trail we suddenly heard the song of a very rare bird, a White-necked Babbler, but I was not 100% convinced of its identity yet, however after a short playback of its call the bird perched right in the open. Wow, what an unexpected sighting and what a finish to Taman Negara!
Before Max and I were dropped off at the airport we paid a visit to Kuala Selangor where we did a short but productive birding session in the mangrove forest. Chestnut-bellied Malkoha was the definite highlight.
At the terminal we said goodbye to Sander and Jelmer. Guys, it was an amazing 2 weeks and thanks for your amazing preparation!
By now I'm at 1151 species, an incredible tally for 51 days in Asia. A 22.57 bird a day average. Now we're off to the Philippines where most of the birds we encounter will be new so it is still possible to end this month at over 1300 species. Let's keep our fingers crossed! 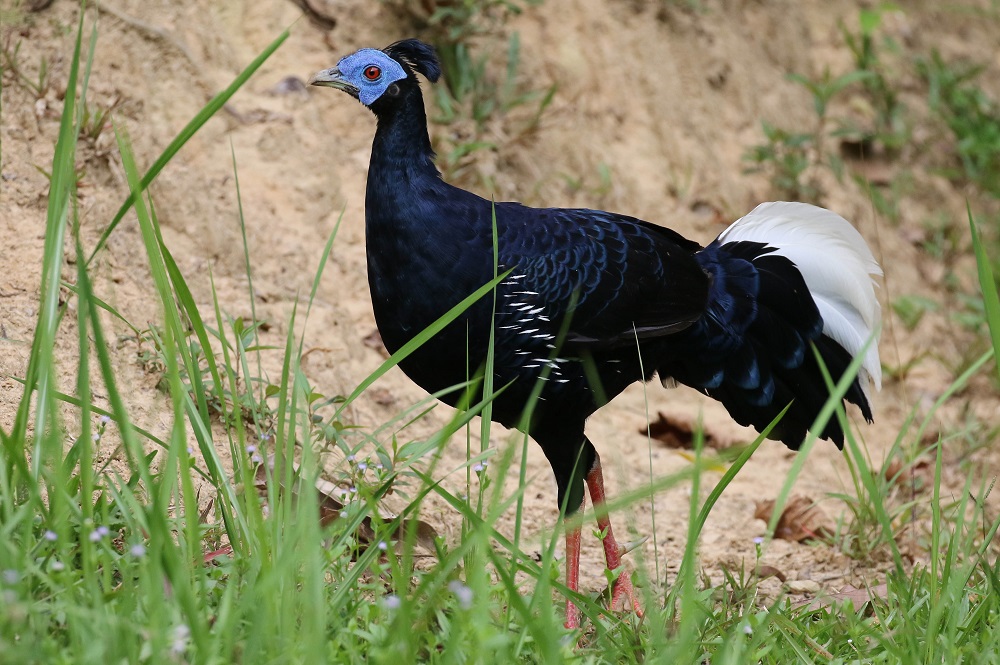 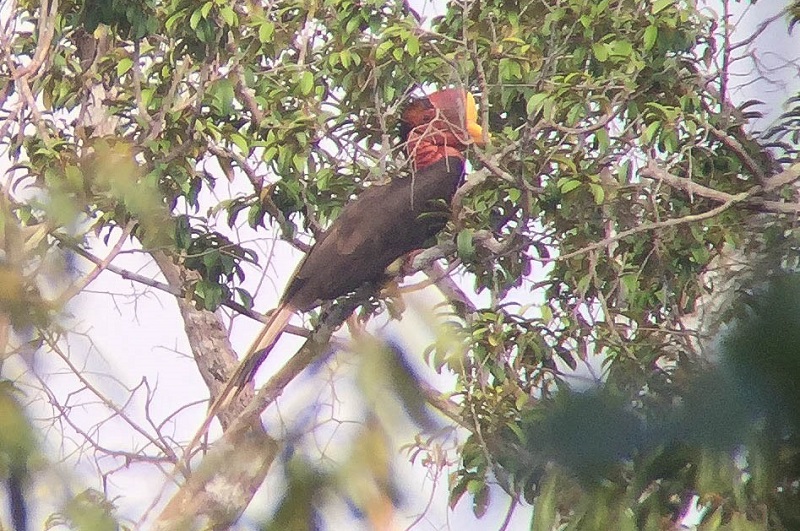