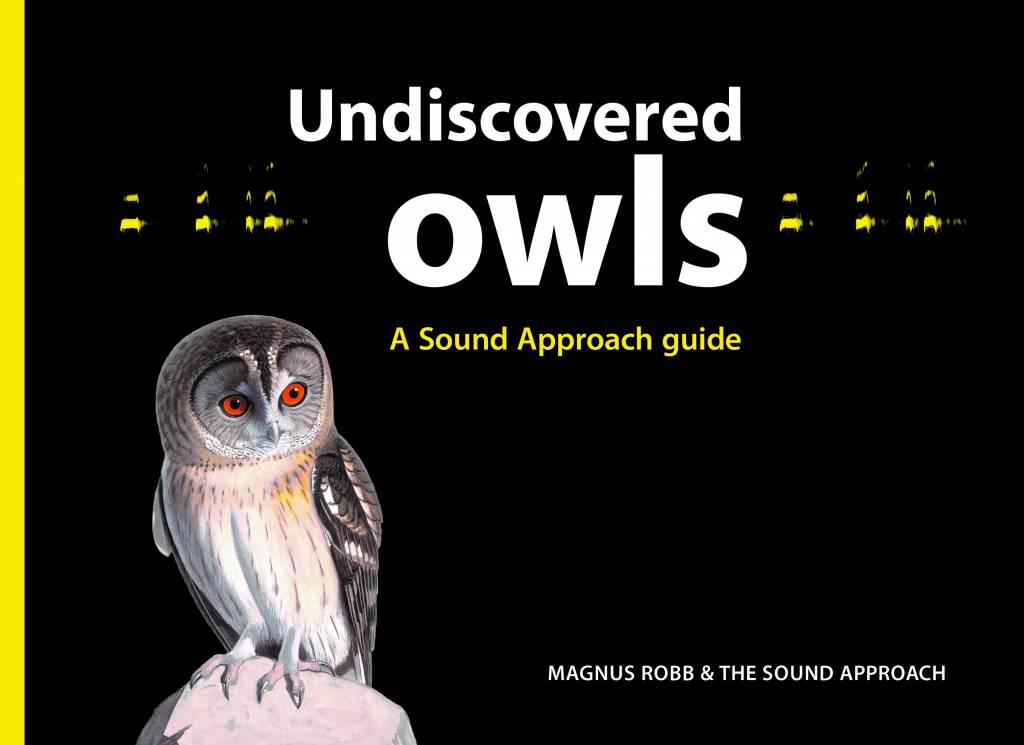 Before this book was published, a five star review already appeared on Amazon. The Sound Approach (TSA) has a good reputation and after their discoveries in Turkey and Oman, the expectations for this production were obviously high. Owls is good, but is an a priori five star review justified?

For the fieldwork TSA deserves nothing but hallelujahs. If you re-discover the population of a lost species and find a (probable) new bird to science, well, that's nothing but a brilliant piece of ornithological work. This review however only deals with the product itself: a book and four CDs. Owls is similar to their other monograph Petrels night and day (Robb & The Sound Approach, 2008). Each species gets a fairly comprehensive text, accompanied by good photographs, artwork and sonograms.

In the book you'll find several unfamiliar popular names (including the beautiful Cucumiau - an onomatopoeia) with associated scientific names: as in Petrels, TSA uses its own, progressive taxonomy. In the Western Palearctic, TSA recognises no less than an 'extra' three barn owls, a little owl, a scops owl, an eagle owl and a tawny owl, and they also share their thoughts about counterparts elsewhere on the globe. The fish owl in Turkey is split from its relatives in Asia. Owl's calls are crucial in this matter, with the argument (described in the Eagle Owl chapter) that their vocalisations are not the result of imitation, but of natural selection. Calls therefore change much slower than in birds that imitate, so if owl taxa sound different, they must have been separated for a long, long time. To support their findings, they quote other sources about differences in DNA, morphology and / or ecology, though in some cases this is only discussed briefly. For instance, for Maghreb Wood Owl (split from Tawny) they mention differences in genetics and morphology, but what these differences exactly are, is hardly explained. In Cyprus Scops Owl (here: Otus cyprius) the plumage characteristics are more extensively discussed and they sound consistently different than Eurasian Scops Owl, but the difference in mtDNA is only 0,1%. If you read the text well, TSA paints its taxonomical picture with shades of grey. In the introduction they clearly state that they do not pretend to be a taxonomical authority and that the choices made are not facts, but hypotheses. But if they are hypotheses, wouldn't presenting these taxa with their second scientific names between parentheses - so Otus (scops) cyprius - make more sense? Despite the nuances, Robb et al. do shake the taxonomical owl tree this way. All in all, the chosen taxonomy leads to discussion, and this unfortunately distracts from the content. Species or not, the differences between the taxa are what's exciting about this book! PS don't forget to read the postscript on this matter, a response to Kirwan et al (2015).

Petrels made clear that Magnus has the talent to transform existing and new data into personal, but informative texts, with lively images of all the corners of the WP that he travelled too. Extinct ancestors, evolution, geology, habitat, dispersion, predator-prey relationships and sounds that are classified in relation to their behaviour, are dealt with in enjoyable prose. In understandable sonograms the different call-types are compared with related taxa. Magnus has the guts to point out what TSA doesn't know, and which mistakes have been made in the past, for instance with a previously published sound of "Turkish Fish Owl" (which turned out to be the excitement call of a Eurasian Scops Owl), and the misinterpretation that Omani Owl hoots of males are pitched higher than in females. There's plenty of room for anecdotes, which are as entertaining as illustrative. Attacks on people (and the fear for it) are not left out. And the story about the interaction between a Pygmy, Tengmalm's and Ural Owl and owl expert Håkan Delin, the illustrator of this book, is simply beautiful.

Delin, according to several comments a funny and energetic man, has the gift to capture owl behaviour in their habitat. His artwork is sketchy and for this purpose that works well: he does a great job catching species in their daily routines. That's a major difference with Killian Mullarney's work for Petrels (for Owls he did illustrate the cover and CDs). Mullarney's art includes habitat and behaviour as well, but he has a strong focus on bird identification. It's a bit disappointing that the little-known taxa, in this book upgraded to species-level, have no identification illustrations. The photographs, most of which are (very) good, only partially fill that gap. Arnoud van den Berg, Dick Forsman and René Pop deserve to be mentioned as top notch photographers.

In general the recordings range from good to excellent. Some calls that are difficult to find, such as the Cucumiau from Sardinia (CD 1, track 68), or the juvenile Omani Owls (CD 4-67 / 68) are sometimes poorer in quality, but these really are exceptions. There's a wide variety of vocalisations and all are accompanied by clear explanations of when and why males, females or young birds produce such calls. This offers birders the opportunity to get a better understanding of their own field observations. Calls of different taxa are compared and therefore the backbone of this work is excellent. Often other birds, amphibians, cattle, dogs, wild mammals or humans can be heard in the background of the lively recordings, and this (in combination with the text) takes you to the places where the tracks were recorded. The highlight is CD 1-4, a Barn Owl recording with Arabian Scops Owl, Arabian Eagle Owl, a cow and a pack of howling wolves in the background. Goosebumps. The Long-eared Owl on a Raven's roost, a Peregrine that comes a little too close to a Short-eared Owl's nest and the "devil's cackle" of an Eagle Owl with rutting Red Deer in the background are gems too. Listening with headphones on -for stereo effect - is highly recommended! The information about birds and other animals in the background is so complete (some clicking bats aside), that I was genuinely surprised I heard an unlisted Grasshopper Warbler in a Short-eared Owl recording (CD 2-80). There's a rare flaw in CD 2-65. From 2:04 a female Long-eared Owl should give her so-called Vvvw-call, but the track - without the call - only lasts 1:38. In Eurasian Scops Owl there's also space for amphibian calls, which is very useful. Most experienced birders will no longer be confused by Midwife Toads, but Iberian Midwife Toad, now that seems to be a true pitfall.

Unfortunately, my Boreal Owl track (CD 1-30) has the hick-ups. And that gets me to the point of CDs. In a digitalised world I want to listen to recordings in the field near a calling owl, or on the train to work, or at home on the couch, using my own playlist on a smartphone - and not with the book on the keyboard of my laptop, my last CD player in the house. Fewer and fewer people have a CD player and therefore this publication might age itself faster than justified. TSA is fresh and innovative, but they are somewhat conservative on this point. Is this because of the higher sound quality on CDs? Possible they also want to stay in control of their recordings, but the question is how relevant these are without the book. Illegal digital distribution without the context of the book seems rather pointless. QR codes for a website, an app for those who purchase the book, or even a USB stick are in my opinion solutions worth thinking about. With digitalised recordings, changing CDs (both the Asio and the Strix owls are not all on the same disc) and skipping tracks with the forward button will be something of the past. I therefore consider, for personal use only, to rip the CDs. In the future, a digital book on a tablet where you can listen to the sounds while reading could further integrate the combination of text and sound. Video (images and sound!) then becomes a possibility, too.

The overall quality of the sounds and sonograms, and the insights they provide, deserve a big hallelujah, just like the way these are presented - also for those sceptical or ambivalent about the taxonomical choices. TSA once again proves that even in the 21st century, there's still something to discover. Not during expeditions to remote parts of Indonesia or Peru, but relatively close to home. Despite the absence of identification illustrations and a more modern sound carrier than CDs, anyone interested in owls and their sounds can buy this book without hesitation. I guarantee you'll enjoy it.