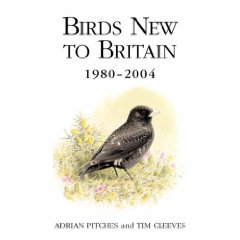 It was with some anxiety that I was awaiting this publication
with its promising title, because finder's accounts
are among my favourite pieces of ornithological prose,
especially those that ooze the excitement of the actual
moment when the bird was discovered. Finding a genuine
rarity already causes one's heart to skip a beat but
finding a national 'first' must be the birding equivalent
of having a cardiac arrest! These feelings of elation were
already present in this book's predecessor (Birds new to
Britain and Ireland, Sharrock & Grant 1982), which
covered the period 1950-79, but much less so than in
the latest offering of T & AD Poyser. Maybe because
'modern day' birders are more in touch with their emotions?
Other clear differences between these two titles
are, in the 1980-2004 book, the birding reviews of each
year. These are then followed by personal memories of
the year at hand, by some of Britain's most prolific
birders. Some of those short stories are exciting tales of
twitching, while others offer a more personal insight
into what makes birders tick.
The species' accounts themselves are basically reproductions
from articles published before in Birding
World and British Birds, including the birds' descriptions,
but are sometimes updated with new information.
Because of renewed taxonomical views, some species
were, with hindsight, admitted to the British list years
after their discovery. The accounts are accompanied by
a pen drawing, most of which were specially commissioned
for this book. Although not always artistically (or
anatomically) 'correct', they do add to these stories.
However, Dutch birders will actually recognize the
drawing of the Red-necked Stint Calidris ruficollis as the
'first' for the Netherlands (Lauwersmeer, Groningen,
May 1987), by Erik van Ommen. This makes one wonder
if the other drawings have any direct relationship
with the actual first for Britain, or are just a general
representation of the species involved. Personally,
I would have preferred to see original field sketches of
the actual birds only.
Photographs usually also help to clinch the identification,
or to revive memories of a particular bird. Where
available, shots of most of the records described have
been included. This is actually the only disappointing
part of the book. Obviously, not all birds were photographed
from all angles. But of the ones that have been
published before, the reproduction is often poorer in this
book. The best pictures are generally the most recent
ones, probably aided by the digital revolution.
The book closes with a list of birds on the Irish list
that have not (yet) been recorded in Britain and two
indexes for cited references, one for each separate year
and a general one. It would have been more practical to
combine these last indexes into one. But these are only
minor points of criticism on an otherwise very readable
and well-produced book, that will hopefully stimulate
more (Dutch) birders to go out and find their own
'firsts', whatever country they may live in. GERT OTTENS