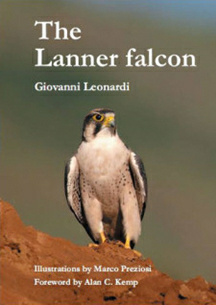 The Lanner Falcon is an iconic bird of prey indeed. It is perhaps the most versatile of all large falcons in its hunting techniques, and has a large breeding range, mainly in Africa, the Middle East, and southern Europe. It has several distinctive subspecies, some are resident while others perform annual migration. And the Lanner has a long history alongside humans, and has been used in falconry for centuries, though it is probably less popular than other, more powerful large falcons.

This book is not a coffee-table book, nor a field guide for identification. More than anything else it is a huge accumulation of all pieces of knowledge on Lanner Falcon. This is the third edition since the first edition published in 1992. It includes ten main chapters that deal with its biology, distribution, variation and human history. Each chapter is divided into many sections and sub-sections. The scientific background and training of the author Giovanni Leonardi is apparent in the structure and style of writing of the entire book. Each sub-section is almost a stand-alone document, with an introduction that defines the main topic of the sub-section, and the results or main body of information. Sub-sections often end with a short discussion describing the current gaps in knowledge of that aspect. The author very carefully references each information element to its source, which results in an impressive 27 pages of references. The language used is pretty much scientific, and the sub-sections are well-structured to fit scientific style. Each sub-section is accompanied by relevant graphs, tables, maps, and photographs. Some of these were produced by the author especially for this book, while others were reproduced from other sources. This is one of the drawbacks of the book in my eyes - even though it is intended to maintain high scientific standards, the figures and maps sometimes lack information that is essential for interpretation. This is a shame: the six maps presenting GIS models developed for this book between pp 269-270 lack significant details about the data and what they represent.

As mentioned before, this book covers all possible aspects of Lanner Falcon life. This is done in great detail. However, some of the data collated here is rather esoteric and of no real importance to those who just love large falcons, but rather is just an accumulation of all available knowledge. Examples for this are the sub-sections about the chemical composition and diseases of Lanner Falcons. One piece of relevant information that I found lacking is the current use of Lanners for falconry and its implications on conservation.

Some of the chapters offer more enjoyable reading for birders, such as the chapters on subspecific identification, distribution, hunting and movements. The colour plates are magnificent and include photographs by leading wildlife photographers. Other chapters are heavier and more technical. All in all, this book is an impressive collection of information, and is well structured. It is an effective review of substantial literature, and is an essential source for falcophiles and for anyone with a professional interest in large falcons and specifically in Lanners. I think that an inclusion of an index would have made the access to the data easier, but still it is an important addition to existing literature on the Lanner Falcon, by collating all available knowledge, and also by producing original results for this book.