Abstract
The Agami heron is ranked 13th among the world's conservation priority heron species, and 2nd for the Americas. Just 3 years ago, nothing was known about the feeding grounds of this species during the breeding season, or about areas used during the nonbreeding season. In French Guiana, which holds the world's largest Agami heron colony (representing over 95% of the known population), the location and characterization of these habitats as well as the identification of the geographic location and routes travelled by breeding and non-breeding individuals was crucial in order to evaluate the threats on the species and develop an effective conservation action plan both in French Guiana and throughout its distribution in South and Central America. To achieve this objective, GEPOG (Group for the Study and Protection of Birds in French Guiana) tracked 8 agami herons from 2012 to 2013 via the European LIFE+ Cap DOM program.

Introduction
The Agami heron is one of the most cryptic and unknown heron species of the Americas, and very scarce throughout its distribution in North-Eastern South America and Southern part of Central America. It has been uplisted to "Vulnerable" by the IUCN Red List because it is suspected to lose 19-26% of suitable habitat within its distribution over the next three generations. But it is also one of the French Guiana flagship bird species thanks to the colony of over 2000 couples found in the Natural Reserve of the Kaw marshes.

Objectives: 1) enhance the understanding of the ecology and behaviour of this species through Argos Tracking, and 2) use these results to write the first conservation plan. 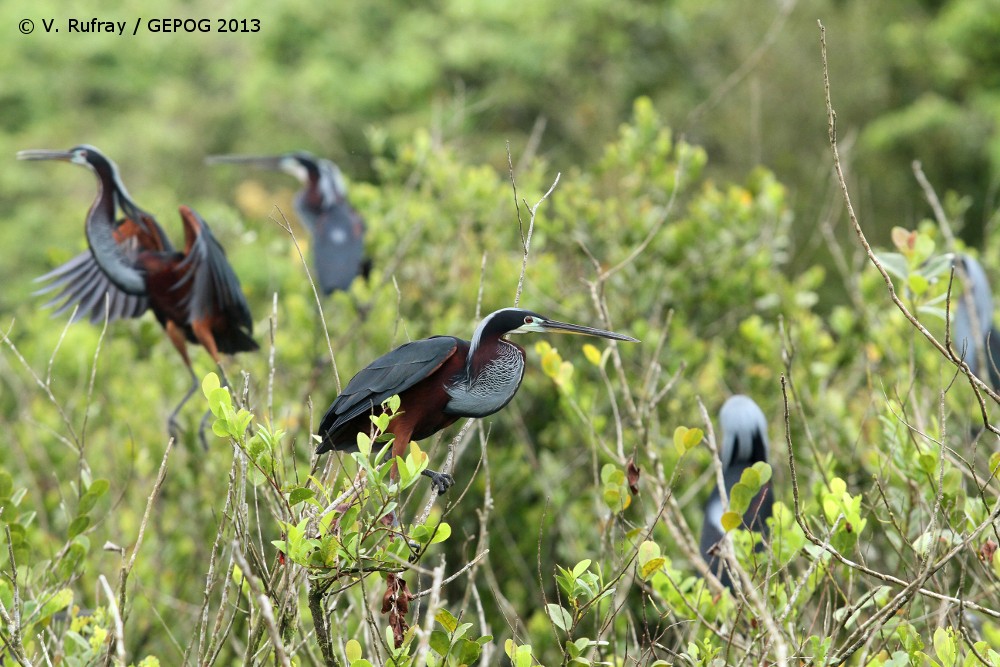 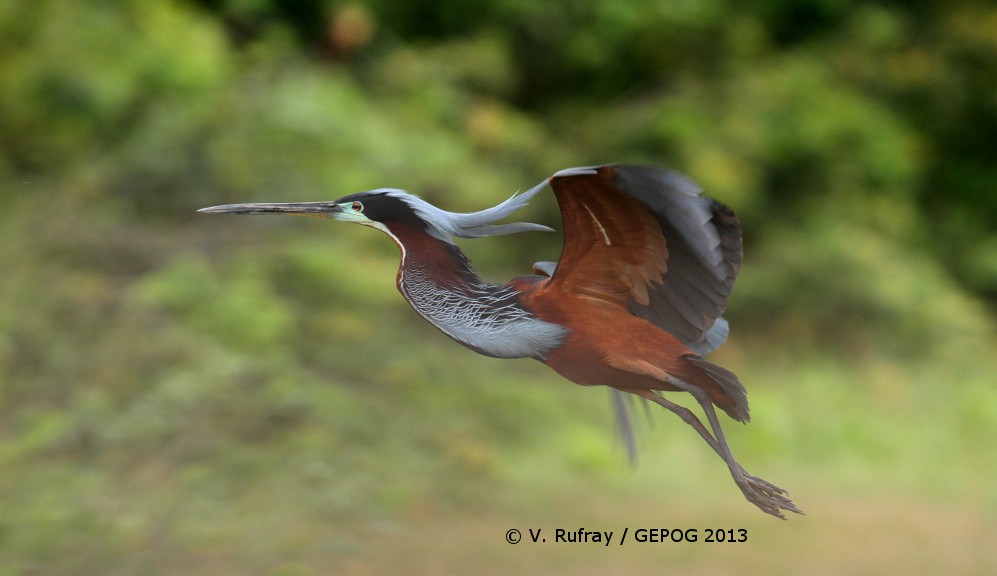 Results during the breeding season
The home ranges in the Kaw-Roura marshes were analyzed for 3 male herons: Eliot and Kanapaich (before migration) and Markaw (who never migrated) with a mean of 148km² at 95% and 24km² at 50%.
The global home range for all herons is of 360km² at 95% and 82km² at 50%, covering marshes, mangroves and swamp forests.

Results during the non-breeding season
Data from 4 individuals show that this species can migrate in different directions along the coast (Brazil, Suriname and Venezuela) and is able to cover up to 1300 km within two months, including a significant stop-over. However, not all birds migrate (one stayed in the area of the marshes around the colony).
The study shows that the Kaw-Roura marsh colony receives individuals from the whole Atlantic coast of the species' distribution area. This confirms the importance of keeping the place protected and of regular monitoring of the colony. 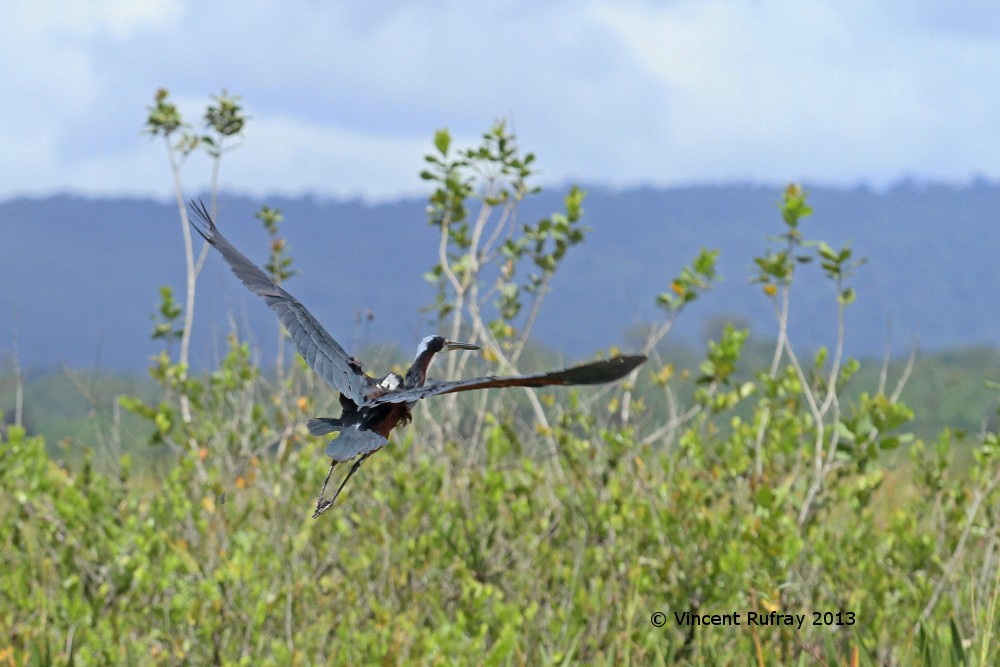 Agami heron Agamia agami with its argos tracker on the back (V. Rufray/GEPOG) 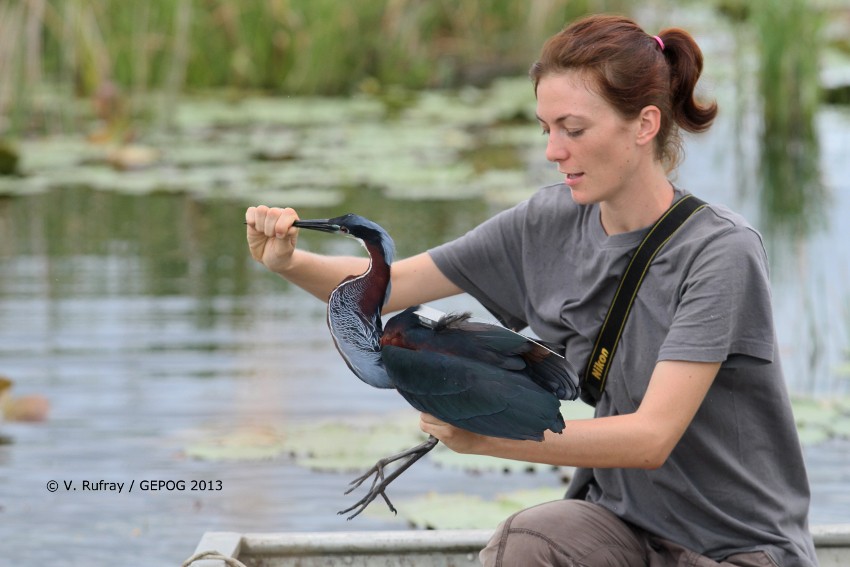 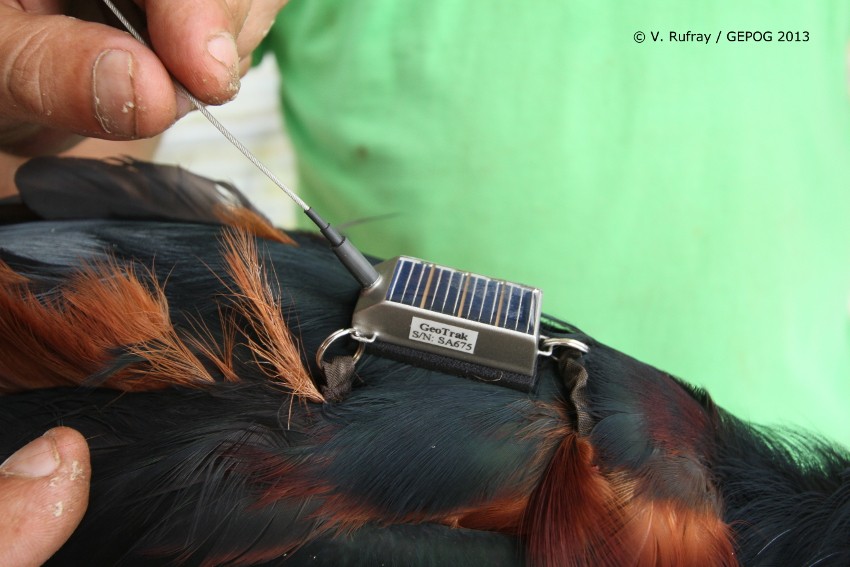 The Conservation Plan
The study showed that agami herons migrate long distances; therefore appeared the need of international cooperation at the continent level for conservation efforts. A conservation plan has thus been co-written with different partners, natural reserves, ornithologists and organizations from French Guiana, Brazil, Peru, Suriname, Costa Rica, Paraguay, USA, France and The Netherlands.
During this writing process, it has been decided to create a specific working group for the species under HeronConservation, the specialist group for herons from IUCN. This working group is currently fixing its strategic statement and future actions. 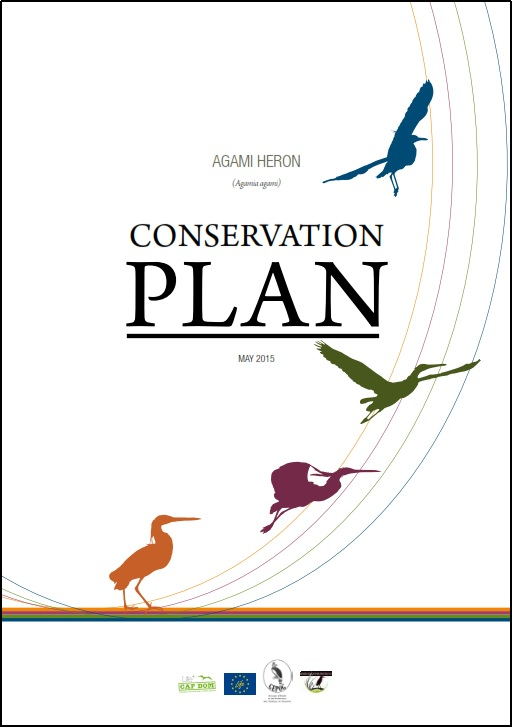 Contacts of Natural Reserves which have Agami heron sightings or breeding colonies in their areas and are members of the Agami Heron Working Group:

Wow, great pictures & information! Who is the author of the article? And is it possible to visit (the vicinity of) the colony in French Guiana? 2,000 breeding pairs, that must be a spectacular sight!