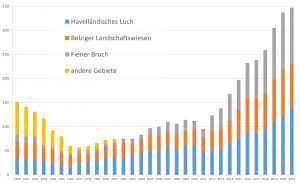 " Summary For the period 2001 to 2017, movements of ringed Great Bustards (Otis tarda) between the three conservation areas of the Belziger Landschaftswiesen, Havelländisches Luch and Fiener Bruch were documented and analysed. Our data are essentially based on ringing, sightings of ringed birds, camera traps and radio-tracking. In addition, all available random observations apart from these three areas were analysed. Nearly half of the Great Bustards change at the immature age to one of the other areas. Later, at reproductive age, 17.7 % of the females still alive and 43.2 % of males were found in one of the other areas. The rest returned to their natal site or changed rapidly, with several birds changing between all three areas. Some of the birds migrated again and again in the course of their life, with up to 14 changes per bird documented. Most flights were recorded between the Belziger Landschaftswiesen and the Fiener Bruch; sometimes the majority of the birds changed between the two areas. There are fewer changes between these two areas and the Havelländisches Luch. This is probably caused by methodological reasons (less ringed birds in the HVL), the slightly larger distance, and the existing wind farms on the two flight paths. The entirety of random observations show that there are a variety of movements beyond the flights between the three breeding areas, most of which appear to be related to juvenile dispersal. The definition of flight corridors solely on the basis of random observations is not possible because of the undirected nature of the dispersal. The biological background of juvenile dispersal is to find other reproductive groups for the purpose of genetic exchange within the meta-population. Today, communication and genetic exchange in the remaining German meta-population are complicated in three ways: due to the drastically reduced number of reproductive groups, their large distance from each other, and in addition anthropogenic obstacles on the flyways, especially overhead lines and wind farms. A number of conclusions of our analysis are aimed at keeping the main flyways free, removing existing obstacles in the medium term (wind turbines, medium voltage power lines) or at least improving their visibility (high voltage power lines). "

" This bird was hatched in the Bird Conservation Centre Brandenburg this year by an incubator and released in the Belziger Landschaftswiesen near Belzig. It was observed there till 23.October and then the signal was lost. As you can see at the pictures the bird is fitted with a VHF-transmitter. The frequency of the Transmitter is 150.180. It sends out signals at regular intervals. Unfortunately it is not a GPS-Logger. It is always amazing how long the bustards cover in their first year of life. "