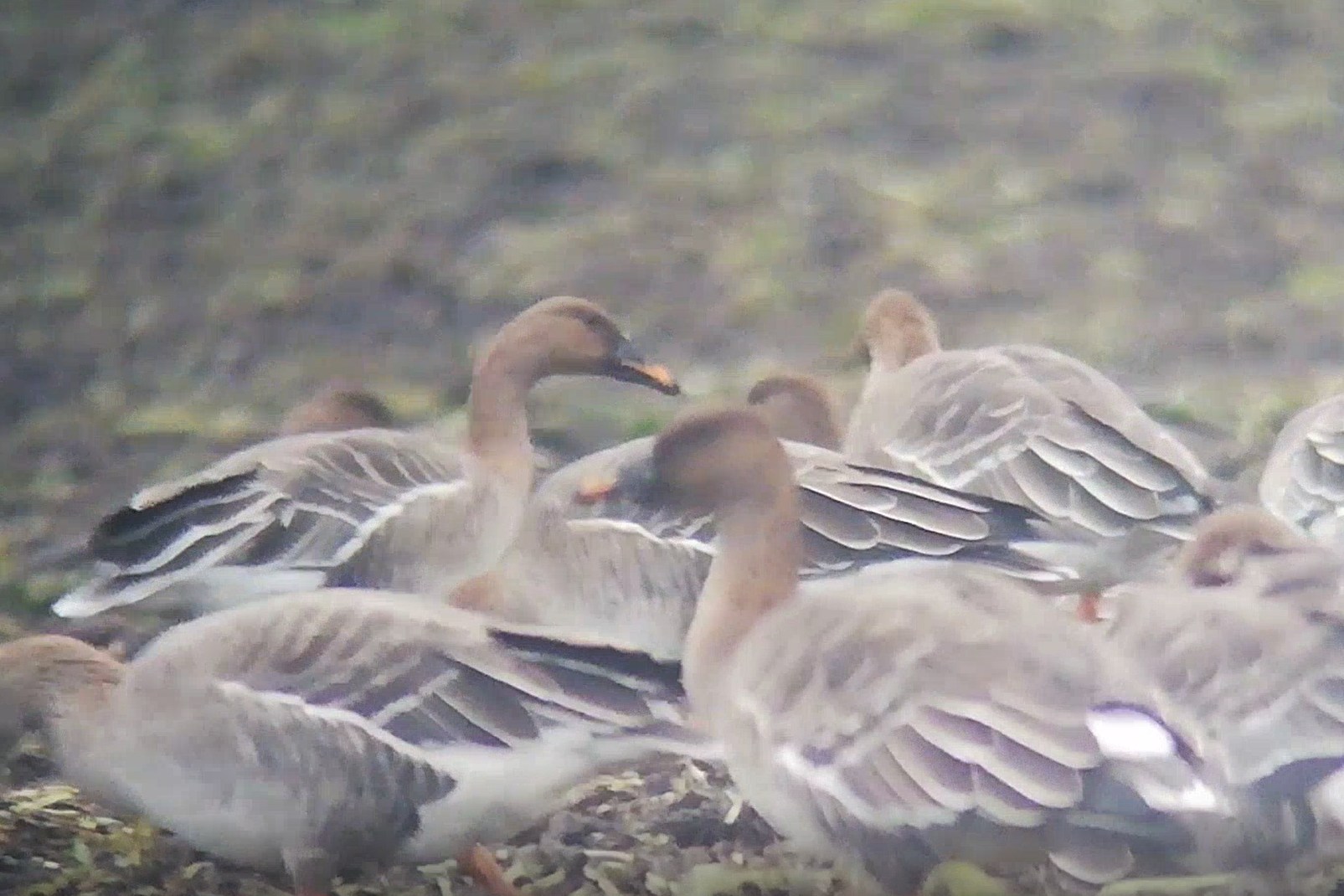 Dit is in elk geval interessant:

"The PCAs indicated that the Taiga and the Tundra BeanGoose can be separated using genomic data."

"Finally, based on the low genetic differentiation, considerable morphological variation and incomplete reproductive isolation, we argue that the Taiga and the Tundra Bean Goose should be treated as subspecies."

Two Tundra Bean Goose Anser fabalis subspecies – the western A. f. rossicus (Buturlin, 1935) and eastern A. f. serrirostris (Swinhoe, 1871) – have been described based on morphological and distributional criteria, although identifying these subspecies outside their breeding and wintering ranges can be challenging. In recent years, studies of other goose populations have increasingly used photographs to identify species in the field. An assessment of whether experts can differentiate the two Tundra Bean Goose subspecies from photographs therefore was undertaken, to verify the accuracy of this potentially useful method for this particular species. Here, we analysed the consistency with which experienced goose researchers attributed pictures of Tundra Bean Geese to either subspecies, using 48 photographs of the heads of individual Tundra Bean Geese, taken at five sites where the birds were caught or observed within different parts of the breeding range. Each individual was assigned to subspecies on the basis of its catch location. Photographs were numbered, mixed using a random number generator, and then submitted to four internationally renowned Bean Goose experts (selected on the basis of their publications) as a blind test. Each expert was asked to identify each picture as either rossicus or serrirostris. Three birds were omitted because they were not assigned as rossicus or serrirostris by all four experts. Overall, 17 (37.8%) of the 45 geese were classed as the same subspecies by the four experts, and a further 18 (40.0%) by three experts, indicating that although some individuals could be identified to the subspecies level in this way, they are not well recognised by the photographs taken during our study. The probability of each expert misassigning subspecies ranged from 0.16 to 0.49 (mean ± s.d. = 0.28 ± 0.07), and the mean probability of the experts classing subspecies correctly (i.e. in accordance with the catch site) was 0.72 ± 0.15 across the study area, increasing to 0.79 ± 0.06 on omitting the least “accurate” expert. There was no difference between catch locations in the proportion of photographs assigned correctly. This study reinforces the view that photographs cannot be used for reliable post hoc identification of Tundra Bean Goose subspecies. Thus, photographs taken during aerial surveys in the arctic, during ground surveys in China, and those posted on eBird and other birding platforms should be treated with caution as a means of describing their distribution. Taking detailed morphological measurements is strongly recommended when handling Bean Geese. Genetic analysis of feathers or blood samples would also help to clarify Tundra Bean Goose systematics and distribution, by identifying the markers that permit differentiation of the two forms.

"Additionally, it is thought that the orange or flesh-colour band on the beak generally does not extend under the nostrils (orgoes just slightly under them) in rossicus,whereas in serrirostris the bill band is yellow-orange (in some cases reddish), and sometimes extends beneath the nostrils (Emelianov 2000)."