Ethan Kister was on the same flight from Addis to Nairobi and together we arrived around 2 AM, it took us another hour in a cab before we finally arrived at Stratton Hatfield’s – the owner of African Birding Safaris - parents’ house, just in time for a 1,5 hour nap.

At 5 AM we were around the breakfast table with our crew for the next 16 days, Joseph Aengwo (guide), Zarek Cockar (logistics), Ethan and myself. African Birding Safaris had put together a 16 day mega tour for us including almost every corner of Kenya. It was great that Ethan joined for the ride since I will also be birding with him in South Africa, Mexico and the US and in addition to being good friend he is a fantastic birder.

While having our coffee a Montane Nightjar was calling in the background, my first new species in Kenya.

We spend the whole day birding the lower slopes of Mt. Kenya, from the countryside to the forests and eventually around our campsite at Castle Lodge. We notched up a whopping 59 new species for my Biggest Year list and among them were Tullberg’s Woodpecker, European Roller, a stunning Black-fronted Bushlark, Crowned Eagle, Stuhlman’s Starling, Scarce Swift, Crowned Eagle and Yellow-crowned Bishop.

Tomorrow morning we will focus on finding the specialties!


April 15th FROM THE SLOPES OF MT KENYA TO THE LAVA PLAINS OF SHABA
At the crack of dawn we were out scoping the treetops around Castle Lodge, our goal, the endangered Abbot’s Starling. Joseph was razor sharp with the scope and picked out a brilliant male Abbot’s Starling on top of a tree, fantastic!

After that early success we did some roadside birding down from Castle Lodge which produced a smart White-browed Crombec. Our best sighting of this morning was still to come when we returned to the campsite, there were two Olive Ibises sitting out in the open calling from a bare branch, magnificent! These rare forest dwelling ibises are rarely observed and few people are lucky enough to have them right in the open.

We packed up our camping gear and headed towards Shaba NP, in the dry north-central part of Kenya, but first we had an appointment with Lazarus Kariuki, the Hinde’s Pied Babbler guy. Upon arrival I asked him: ‘how big are our chances of finding the babbler’? Lazarus replied with a broad grin: ‘A hundred percent because I know where they are J’. Good stuff! We walked downhill across a muddy track and behold, there was a fantastic flock of 5 Hinde’s Pied Babblers allowing great views!

We pushed on to Shaba NP where we arrived around 4 PM, just in time for some birding. We started off well with a stunning mixed flock of Steel-Blue and Straw-Tailed Whyda’s including multiple stunning males. Other goodies in those short 2 hours of birding were Barred Warbler, Black-cheeked Waxbill, Brown-tailed Rock-chat and Acacia Tit. Next we drove to our campsite at the edge of Samburu NP. The guys set up camp and I started cooking on the gas stove, wonderful to be cooking again, my second greatest hobby in life!

April 16th FANTASTIC BIRDS, BUT EVEN BETTER MAMMALS!
At 6 AM we were at the gates of Shaba NP, ready to drive all the way to the lava plains in the east of the park to look for the little known William’s Lark. As it was just getting light we drove into the park and barely 15 minutes in we suddenly saw a Hyena running next to the road. Spotted?? No! There was a Striped Hyena, right in the open! One of my nemesis mammals and a rarely observed beast. Wow!

As we pushed eastwards we now and then stopped and listened for the poorly known Friedman’s Lark. At the third stop it was Bingo, we heard two birds singing on the dry hills next to the track.

Around 7 AM we arrived at the lava plains – after finding both Lichtenstein’s- , Black-faced- and chestnut-bellied Sandgrouse on the track - what a striking landscape and every tree was filled with Donaldson’s Smith’s Sparrow-weavers. William’s Lark was fortunately wonderfully common and we had fantastic views of multiple birds.

We drove to the Shaba Sarova Lodge – picking up Red-Tailed Shrike and Magpie Starling on the way - for a cold drink and a well-deserved dip in the pool, man that was good!

After this intermezzo we continued birding and this started off great with a Somali Courser on the Shaba airstrip. Our afternoon birding drive was in Samburu NP, what a beautiful park with stunning landscape and Gerenuk’s and Grevy’s Zebra’s, one of the more better looking animals on the East-African plains.

We quickly found another target bird, the Somali Bee-eater and having that one in the bag we just did a normal game drive, targeting Vulturine Guinefowl of course ;-). We self-found a female Lion feasting on a Gazelle, but the highlight of the day was still to come…

Suddenly we saw two cars stopping and looking at something and as we drove over there we saw a stunning female Leopard and her subadult cub, one of my all-time favourite animals in the world and we got fantastic views, what a finish!

April 17th ACROSS THE ABEDARES
We packed and left our campsite very early in order to get to the gate of Abedare NP. As we drove over there it was raining heavily over the Abedares, but typically for this Biggest Year it cleared just as we were paying our tickets for the park J (while picking up Brown-backed Honeybird while we were at it).

Driving up to the moorlands was a fantastic experience as we first went to open forest and scrubs into beautiful misty Bamboo and cloud forest, on the way picking up goodies like Mountain Yellow Warbler, Eastern Bronze-naped Pigeon, 3 Giant Forest Hogs and our first of many Jackson’s Francolins.

The moors itself were birdier than I would have thought and our main target here, the Abedare Cisticola was pleasantly common. A very good find was a Striped Flufftail that responded loudly to a playback of its call in the middle of the day!

But again the highlight up here was not a bird but a mammal, a fantastic Serval that Ethan brilliantly picked out next to the road, another nemesis mammal for me!

As we drove down on the other side of the Abedares and into the Rift Valley we stopped at a large patch of grassland where we saw no less than 5 of the endangered Sharp’s Longclaw.

Just as it was getting dark and we were nearing Nakuru City we suddenly saw a flock of falcons hunting at the roadside. They were Amur Falcons, one of my favourite birds of prey! 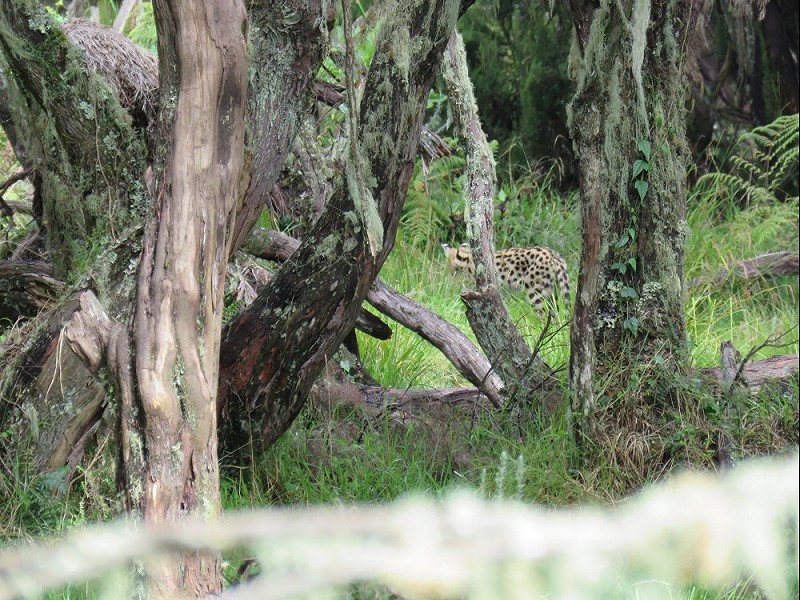